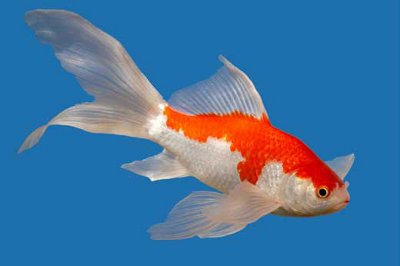 Facts about Comet Goldfish. Temperament of the Comet Goldfish Peaceful, calm. Experience Level: good for Beginner. Diet Type: Omnivore. Minimum Tank Size: 20 gallons. Temperature: 65.0 to 72.0 F (18.3 to 22.2 C) but can live in cool temperatures . Range ph: 6.0-8.0. Hardness Range: 5 - 19 dGH. Hugo Mulertt was a Government worker in the 1980s in the United States, who breed the comet-tailed goldfish from the common goldfish. The comet or comet-tailed goldfish is one of the most common variety of fancy goldfish in the United States. The Comet Goldfish is similar to the common goldfish, except is usually smaller and slimmer, and is noticed mostly by its long deeply beautiful forked tail. The Comet Goldfish are often sold as feeder fish at pet stores. The comet with the most color this comet goldfish comes in yellow and silver and also come in a combination of other metallic colors. Healthy looking ones will most likely sold as pets and at a higher price the feeders. Comet Goldfish can breed with some other types of goldfish like the common goldfish.
However, most Comet Goldfish only grow three to four inch in length, and usually become larger if placed in a pond or a large fish tank.
There is a few types of Comets goldfish with different personalities and colors, such as the Sarasa comets goldfish. Sarasa goldfish are very beautiful. They have a few colors on their bodies that reminds you of Koi carps.
They are best kept in cold water aquariums at room temperature. Suitable plants to keep in an aquarium tank with comet goldfish such as Elodea (Egeria), Anubias, Java moss and other plants your pet store tells you are excceptable for your Comet goldfish.
Comet goldfish eat most goldfish food such as most flake food and pellets and other food that your pet store tells you are excceptable.
Comets goldfish can be breed in aquarium or in a garden pond. Keep them well feed and lower the temperature for a period of time of no less then a month, you should then slowly raising the temperature of the water again to stimulate spawning. The goldfish spread their eggs freely in the water. The eggs and fry will be eaten by the parents unless measures are taken to protect them. The best way to protect the fry is to remove the parents from the breeding aquarium once the spawning is completed. There is a little possibility that a few fry will survive to be adults in a well planted aquarium or pond. The odds are very low if you do not remove the parents.
Comet goldfish in most aspects can be treated as any other goldfish.

Search the Web for More information on Comet Goldfish at LookSeek.com Search