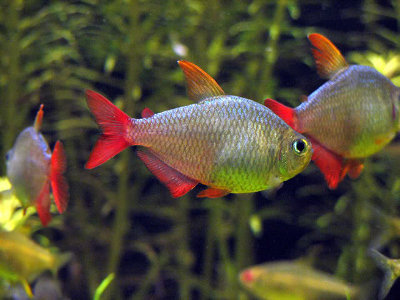 Colombian tetra is also known as blue-red Colombian tetra. It is a freshwater fish which belongs to the family of Characin and native to Acandi River drainage system just near Acandi in northwestern Colombia. This fish gets its name for is brightly colored tail and reflective body which is very attractive.

Colombian tetra has been introduced to the aquarium recently and it is considered to be expensive than other tetras. In fact it is one of the handy tetras. It is known to harass other small fishes in the aquarium but copes well with other types of tetras. It is also advisable to keep them in 5- 6 groups to prevent fights.

Some part of the anterior to the dorsal fin is mostly humped and it is normally tall. The mouth is lined with large teeth and powerful jaws. The eyes are large, which explains why they are very aggressive when searching for preys. It can be able to spot a predator at a distance. It is a good swimmer considering that it has a narrow, muscular caudal peduncle as well as a tall, sharp edged caudal fin.

It is known to be very aggressive such that when feeding, one should be careful since it can jump and get out of the aquarium.

For breeding habits Colombian tetra requires neutral to slightly acidic water around 20-24 Degree Celsius. But it is advisable that after spawning you remove the parents from the same water with their young ones so that they cannot eat them.

The lifespan of this fish is believed to be 3-5 years. It feeds on brine shrimp or daphnia, tubifex, micro pellet, dried bloodworms and flake foods.

Search the Web for More information on Colombian Tetra at LookSeek.com Search