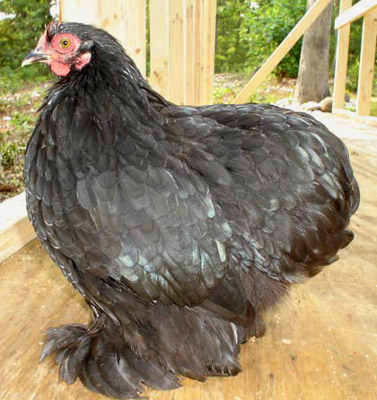 Facts about Cochin chicken. Cochin Chicken are used for Eggs and Meat (It has become a rare breed these days) Origin: Cochin chicken, China (A French Colony that is in present day Vietnam)
Eggs: On an average, a Cochin chicken lays about 150 – 200 small and tinted eggs

Weight: Both the cocks and hens weigh almost equal when they are matured, but the female Cochin chicken weighs a bit lighter than the males.

Cochin chickens are quiet, not aggressive and hence, are easily controlled. They possess friendly behavior towards fellow chickens and humans. The Cochin chicken usually grow up to a huge body as far their weight is considered. They take more time to attain physical maturity. Their eggs may be small, but they are good layers. The numerous eggs they lay at a time don’t get crushed as they are very careful about their eggs. The Cochin chicken lay eggs throughout the year which reflects their inclination towards broodiness. The average weight of the Cochin chicken is 7 to 9 pounds (3.2 to 4 kg).

The present day Cochin chicken have no relation with the ones from China. Most of the original characteristics of the Cochin chicken was manipulated and was made better by crossing it with several breeds. All we have is their name.

The original birds were large and had feathered feet. Few large feather legged chickens were imported from Shanghai in 1847 and the poultry keepers started calling them as Asia Cochin chickens. This is how that certain breed got named. It has no relevancy with the breed that was originally imported a few decades back.

Cochin chickens are great eaters. They also discriminate based upon their preferences. They ingest enough food to produce animal heat and give eggs even in the middle of winter. The Cochin chicken can survive under hard environmental conditions in which other chickens are supposed to die.

Some poultry keepers say that Cochin chickens should be given green food to keep them healthy. Cochin chickens may hatch more than one batch per year if they are provided with a warmer environment.

Search the Web for More information on Cochin Chicken at LookSeek.com Search