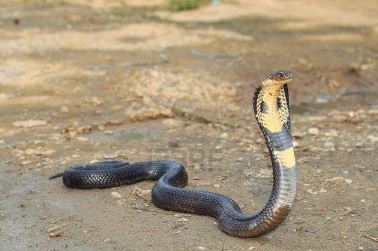 Facts about Cobra Snake. Cobras are famous for the threatening hood at their neck. The Cobra Snake spreads the neck hood out when they feel threatened or angry. Their hood is made up of flaps of skin attached to long ribs. The Cobra Snake can also lift the front portion of their body and head, this helps them search for food.
Like most snakes the Cobra Snakes has a "Jacobsen’s Organ" that gives the ability to smell things with a superior sense of smell. A Cobra Snake can sense really small changes in temperature, which lets them track their prey at night.
The Indian Cobra snake ( Naja naja ) also known as Asian cobra spectacled cobra is a species of the genus Naja, found in the Indian subcontinent and member of the big four ( the big four are the four most venomous snake species responsible for causing the most snake bite cases in South Asia, mostly in India ). Venomous snakes usually belong to the family Elapidae, most of which can expand their neck and ribs to form a wide hood. The name Cobra snake, is short for ( cobra-de-capelo or cobra de capelo ), which is Portuguese for "hood-snake" or "snake with hood".
Herppetologists recently have recognized two full species from within the old Naja naja: Naja kaouthia, the monocellate cobra, found from Thailand to southeastern India and Malaysia. Naja naja proper, the Indian spectacled cobra, found in Sri Lanka, Pakistan and India.
The Indian cobra can grow up to 7 feet (2.13 meters) in length, and is found in the rain-forest or rice fields throughout India, the Cobra Snake is also known for its wide, black band located on its neck and distinctive hood markings. The Indian cobra attacks or defends itself by "spitting" from a distance venom, which if enters the opponent's eyes,causes severe pain and damage.
The Indian cobra diet consists of lizards, frogs, rodents, small and adult rats and small rabbits. Cobra Snakes feed as much as twice a week during warm weather or if the specimens are very active. Not as much feeding during cooler weather.
Indian Cobra Snakes like to lay their eggs in hollow trees, usually 10 to 20 eggs on average, a termite mound or earth into which the snake tunnels. The female guards the clutch throughout the incubation period, leaving them only for a short time when feeding. The young hatch after about 50 or 60 days.
There are 270 different types of Cobra Snakes, they all have short fangs and are all extremely poisonous.

Search the Web for More information on Cobra Snake at LookSeek.com Search