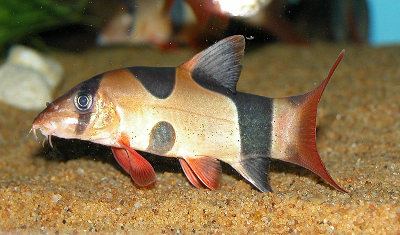 Clown loach originates from the inland waters in Indonesia especially in on the islands of Borneo and Sumatra. In fact it is known to be a tropical freshwater fish which belongs to botiid loach family. It is a fish which is very popular in the aquariums and sold throughout the world.

The clown loach varies in size. It is estimated to be 40-50cm with the typical ones ranging from 15-20cm. Generally the body is long but laterally compressed with a flat ventral surface and an arched dorsal surface.

The head is large with a mouth that faces down and has fleshy, thick lips. It also has four pairs of barbels which are not very visible on the lower jaw.

The spine is movable and lies in a groove below the eye which at times may act as a defense mechanism. Since it is set so close to the mouth, the fish can use it as a predation tool. But when the spine gets injured it can cause a very painful wound.

Clown loaches can be fed with a variety of food. Worms, small snails, banana and other plants are good for them.

Search the Web for More information on Clown Loach at LookSeek.com Search