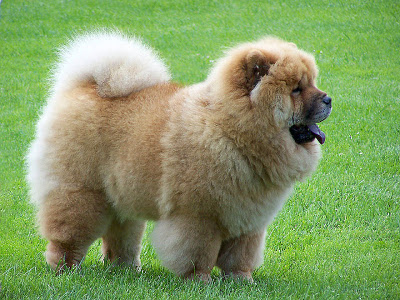 Facts about Chow Chow Dogs, "Scientific name for Chow Chow Dog, or domestic canine, is Canis lupus familiaris". The Chow Chow Dogs black-blue tongue is one of the most well known features of the Dog and with it's almost straight hind legs, which makes it's walk rather constrained.

Chow Chow Dogs sweat glands are between their paw pads.
It is a Fact a Chow Chow Dog sees in color and have better low light vision. Chow Chow Dogs have three eyelids, a lower lid, an upper eyelid lid and a third lid, that is called a haw or nictitating membrane, this keeps the dogs eye protected and moist. Chow Chow Dogs eyes have a special membrane for seeing better at night, called a tapetum lucidum - a dogs reflective layer in the choroid chiefly of nocturnal, causing the eyes to glow when light at night hits the eyes and they consist of some layers of smooth flat cells covered by a section of double deformed crystals.

The Chow Chow Dog head is broad and large with a flattened skull and the deep muzzle is broad. There is a huge neck ruff behind the dogs head, which gives it a lion mane look. The Chow Chow Dogs black nose is large with it's nostrils well open and with the teeth clamping down in a scissor type bite. The small triangular shape ears that stand up are round at the tip with the pear shaped dark eyes that are set back in the hairy face. The Chow Chow Dog have a deep broad chest with a fluffy tail that comes over the back. The dewclaws on the back of the foot that are not needed for anything are often removed. The Chow Chow Dog heavy fur coat comes in two varieties, rough and smooth with the most common colors being black, blue, red, cream, (fawn-cinnamon) and not as much of common colors are white, tan, gray and the coat can have darker or lighter shades.

The Chow Chow Dog is considered a well-mannered dog with a calm temperament and have been known to get along great with children and other pets as long as they are introduced to them when they are puppies. Starting from a young age the Chow Chow Dog need to have a tough training regime set in place as even from a young age they will begin to test their boundaries. The Chow Chow Dog breed is considered a highly dominant breed and thus needs a competent and dominate owner to keep it in place. The Chow Chow Dog needs to have owners that know that every member of the family needs to be considered an alpha in it eyes or else it will have behavioral problems as it gets older.
The number one heath problems amongst Chow Chow Dogs is obesity, so always make sure your dog doesn't get to fat. Many foot problems that Chow Chow Dogs have are just an issue of long toenails. The Chow Chow Dog breed is known to suffer from various eye aliments and one in particular called Entopion, which is an abnormality of the eyelid. They are also prone to hip dysplasia as any large dog would be, stomach cancer and Entropion hot spots all over the body and horrible ear infections. Overall the Chow Chow Dog is a healthy and sturdy breed, though they require tough handling, as long as an owner assures the dog that the dog is not the owner of the house, anybody can have a loving and loyal Chow Chow Dog as a pet.

If purchasing a Chow Chow Dog from a breeder, make sure to find a good breeder with references check at least two to three of the puppies that were purchased from this breeder.
The Chow Chow Dog Non-Sporting Group and in 1903 recognized AKC American Kennel Club.

Average body temperature for a Chow Chow Dog is between 101 to 102.5 degrees
A Chow Chow Dog is an omnivore, (definition-they eat both other animals and plants). All Dogs are direct descendants of wolves.

A Chow Chow Dog’s mouth can apply approximately 150 to 200 pounds of pressure per square inch and an American Pit Bull Terrier, German Shepherd Dog and a rottweiler can have 320 LBS of pressure on avg.

Only humans and dogs have prostates and a dog doesn't have an appendix.
Chow Chow Dog’s nose prints can be used to identify them, their nose prints are like a humans finger print. It is a Fact a Chow Chow Dog smells more than 1,000 times stronger than that of a human. A Chow Chow Dog’s nose, secretes a thin layer of mucous that helps it absorb scent, after that they lick their noses and sample the scent through their mouth.

Search the Web for More information on Chow Chow Dog at LookSeek.com Search