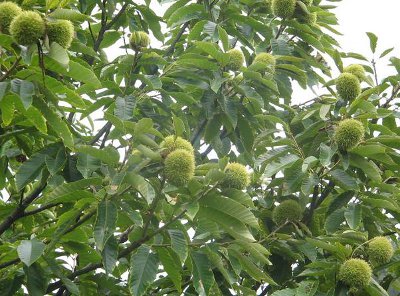 Scientifically known as Castanea mollissima, the Chinese chestnut belongs to the family Fagaceae and commonly found in Korea, Taiwan and China.


Description
The Chinese chestnut is a deciduous tree that grows up to a height of 20 meters. Its leaves are alternate and simple measuring between 10 and 22 cm in length with a breadth of 4.5 to 8 cm. the margins of the leaves are toothed. It produces flowers in catkins which are 4 to 20 cm long. The female flowers are usually located at the base of the catkin while the male flowers are positioned on the other areas.

Fruits
The fruit of the Chinese chestnut consist of a densely spiny cupule which measures between 4 and 8 cm in diameter. It contains two to three brown nuts which have a diameter ranging between 2 and 3 cm.

Geographical Distribution and Habitat
Castanea mollissima has from time immemorial been cultivated in parts of East Asia namely Korea, Taiwan and China. It can be found in areas close to the sea level and at attitudes which stretch up to 2,800 meters. In order to grow and flourish, the Chinese chestnut needs to be planted in an area with full and direct sun. The soil should be loamy and acidic.

Ecology
When Castanea mollissima is planted near other chestnut species such as the Japanese chestnut, the American chestnut and the sweet chestnut, it cross pollinates to form hybrids. It has with time become resistant to the bark fungal disease known as chestnut blight.

Uses
Chinese chestnut produces edible nuts. In Eastern Asia, it is heavily cultivated in over 300 cultivars. Among the common cultivars include the Dandong chestnut, Meiling, Kuling and Nanking. Their nuts are usually sweet and ranked among the best in the whole range of chestnut species. The nuts are not only food to humans but also to wildlife. There are some species such as the American chestnut whose nuts are not as preferable for food.