Back To Category Chimpanzees
Title : 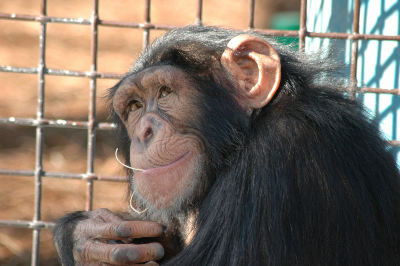 Features of the Chimpanzee

The adult male Chimpanzee is capable of growing to a maximum height of 5.6 feet (1.7 meters), with the maximum body mass of 150 pounds (70 kg). Usually, female Chimpanzees are somewhat smaller than the males. The Chimpanzee has elongated arms that are longer than their legs. When their arms are extended, they span one and a half times the height of their body. Some varieties of Chimpanzee are somewhat smaller and slimmer than others, but they may have longer limbs. The Chimpanzees are capable of climbing trees by means of their elongated, influential arms. Usually, the Chimpanzees have a knuckle-walk on the land, or they walk on all four legs, compressing their fists and sustaining themselves on the knuckles. Their feet are better suitable for walking, as they have wider soles and smaller toes.

The chimpanzee can walk erect on its two legs while carrying objects through their hands and arms. They have a dark color coat, and there is no hair on their face, palms and fingers of the hands, and on the soles of their feet. The Chimpanzees have no tail and the exposed skin of their hands, face and feet differ from pink to extremely dark color, but it is usually paler in younger chimpanzees, and their skin will become darker when they attain the maturity. A skeletal shelf over their eyes offers their forehead a receding look, and they have a flat nose. Even though the jaws project, the Chimpanzee lips are thrust out only when they pout.

Generally the chimpanzee feeds on a variety of fruits and plants, but they also feed on eggs, insects and meat, as well as carrion. The Chimpanzee have a terrific wide-ranging diet that comprises hundreds of recognized foods.

Anatomical variations between the varieties of chimpanzee are minor, but social and sexual behaviors are noticeably different. Some chimpanzee feeds on an omnivorous diet, a group hunting civilization, derived from beta males, guided by an alpha male chimpanzee will have highly complex communal relationships. Some chimpanzee varieties may have a typical frugivorous diet and some others may have matriarchal, nonviolent, sexually amenable behavior. Some may have sex frequently to assist to prevent and resolve disagreements. Dissimilar groups of chimpanzees also contain dissimilar cultural behavior with inclinations for kinds of tools. The chimpanzee is inclined to show greater violence, and in captivity, they use to sleep 9 to 10 hours per day.

Usually, the Chimpanzee attains the sexual maturity after 8 to 10 years of their birth. The testicles of a Chimpanzee are strangely big for the size of their body. They appear with a collective weight of about 4 ounces (110 grams) and this relatively huge size is normally attributed to sperm contest, owing to the polyandrous character of the mating behavior of the chimpanzee.

The average lifespan of the Chimpanzee ranges from 10 years to 40 years in the wild, whereas in the captive, they can live up to 60 years.

Search the Web for More information on Chimpanzee (Pan troglodytes) at LookSeek.com Search