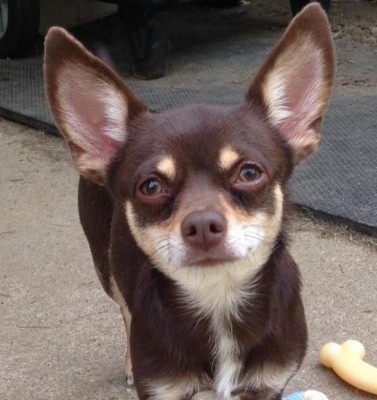 Facts about Chihuahua Dogs, "Scientific name for Chihuahua Dog, or domestic canine, is Canis lupus familiaris". In the 1850s the short-haired Chihuahua Dog breed of today was first discovered in the state of Chihuahua in Mexico (Chihuahua is Mexico’s largest state), as the name of the breed came about. Americans while visiting Mexico would fall in love with this adorable dog and started bringing them back to America, as they started to show up in the late 1800s. A Chihuahua Dog with the named Midget in 1904 was the first of the Chihuahua Dog breed to be registered with the (AKC) American Kennel Club. The Chihuahua is a resilient little breed that happens to be one of the most popular dogs on the planet. Chihuahua Dog was brought over to the European people at the end of the nineteenth century.

Chihuahua Dogs sweat glands are between their paw pads.
It is a Fact a Chihuahua Dog sees in color and have better low light vision. Chihuahua Dogs have three eyelids, a lower lid, an upper eyelid lid and a third lid, that is called a haw or nictitating membrane, this keeps the dogs eye protected and moist. Chihuahua Dogs eyes have a special membrane for seeing better at night, called a tapetum lucidum - a dogs reflective layer in the choroid chiefly of nocturnal, causing the eyes to glow when light at night hits the eyes and they consist of some layers of smooth flat cells covered by a section of double deformed crystals.

This small breed is highly popular due to the Chihuahua Dogs small size and are even much more popular today as long as they weigh less than 2 pounds (.9 kg) The average height to the shoulders of the Chihuahua Dog is 6 to 9 inches (15.2 to 22.8 cm) and the average weight is 3 to 6 pounds (1.3 to 2.7 kg). There are Chihuahua Dogs that can grow to almost 12 pounds (5.4 kg).

This small dog is a great companion breed for any person regardless if they live in an apartment or house. The tiny Chihuahua Dogs are courageous, lively, playful, adventurous, and affectionate to their human companions. The Chihuahua Dog are even one of the most loyal little dogs you will find as they become extremely attached to their owners. Owners of this small Chihuahua Dog breed also help these dogs to develop what is known as “small dog syndrome” in which the owner treats their dogs as babies instead of what they are: dogs. If Chihuahua Dogs are spoiled and allowed to run amok of their domain, the Chihuahua Dogs are known to develop different types of behavioral problems such as jealousy or extreme aggression.
Due to the Chihuahua Dogs small size, it makes them incredibly vulnerable to health problems. Some of these issues include rheumatism, dental issues, glaucoma, issues contracting many colds and they are incredibly vulnerable to fractures during puppy-hood. When it comes to breeding these dogs, all Chihuahua bitches must undergo a c-section as the puppies heads will be too large to pass through a normal delivery. The number one heath problems amongst Chihuahua Dogs is obesity, so always make sure your dog doesn't get to fat. Many foot problems that Chihuahua Dogs have are just an issue of long toenails.

A Chihuahua Dog’s mouth can apply approximately 150 to 200 pounds of pressure per square inch and an American Pit Bull Terrier, German Shepherd Dog and a rottweiler can have 320 LBS of pressure on avg.

All dogs are identical in makeup big or small– 42 permanent teeth and 321 bones. Chihuahua Puppies have 28 teeth and when they become adult Chihuahua Dogs they have 42 teeth. When Chihuahua puppies are born, they have no teeth and are deaf and blind. Chihuahua Puppies for their first few weeks will sleep ninety percent of the day and their vision is not fully developed until after the first month.

Chihuahua Dogs have two times the amount of ear muscles than people. It is a fact a Chihuahua Dog can hear a sound at four times the distance of a human. Sound frequency is measured in Hertz (Hz) Def-Hertz is the measurement of frequency, explicitly it's one cycle per second. The higher the Hertz are, the higher the pitched the sound is. Dogs hear best at 45,000 Hz to 65,000 Hz, while humans hear best at around 20 Hz to 20,000 Hz.

Only humans and dogs have prostates and a dog doesn't have an appendix.
Chihuahua Dog’s nose prints can be used to identify them, their nose prints are like a humans finger print. It is a Fact a Chihuahua Dog smells more than 1,000 times stronger than that of a human. A Chihuahua Dog’s nose, secretes a thin layer of mucous that helps it absorb scent, after that they lick their noses and sample the scent through their mouth.
If purchasing a Chihuahua Dog from a breeder, make sure to find a good breeder with references check at least two to three of the puppies that were purchased from this breeder.

A Chihuahua Dog is an omnivore, (definition-they eat both other animals and plants). All Dogs are direct descendants of wolves.

Average body temperature for a Chihuahua Dog is between 101 to 102.5 degrees
Female Chihuahua Dogs are in heat for matting for about 20 days twice a year. Female dogs are pregnant for 60 days before they’re puppies are born.

Search the Web for More information on Chihuahua Dog at LookSeek.com Search