Back To Category Chevrolet
Title : 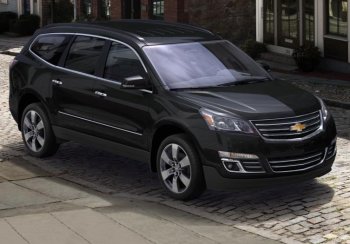 The Chevrolet Traverse's power train is like of the Lambda-based vehicles which has direct injection, LLT engine, and DIHC with VVT. Inclusive also is an automatic transmission that gives power to the wheels, split folding rear seat, spacious cargo area allowing passengers to carry their cargo wherever they are going, and a large crossover that bridge the gap between the truck SUV and a van.

Chevrolet Traverse SUV is considered to be the most affordable of all full size crossover SUVs. This is because it has a standard 3.6 liter that is considered to be fuel friendly. Interestingly, the Chevrolet Traverse has not undergone any engine upgrades so far. This does not mean it is weak because the V6 engine is also known to be powerful especially by the drivers who have used it.

However, the Chevrolet Traverse SUV has undergone different facelifts depending on the year of manufacture.

This year the Chevrolet Traverse SUV was updated twice. There is no any other SUV that has ever been updated twice in the same year. The removal of the traverse badges from the doors was done this year giving it a complete different look from the original one.

This year the Chevrolet Traverse SUV received a facelift. This was done in the New York Auto Show and the improvements for the Chevrolet Traverse were revealed. The Chevrolet Traverse had a new grill and front fascia, a new redesigned rear lift gate, a set of headlights, new power dome hood which was considered to be identical with that of Camaro, tails lights, a beautiful change of exterior design that had different colors, a two bar lower, and three bar upper grille design and well performing car, with improved quality and timing.

This year there was no cosmetic changes at all. But there are other features added just to enhance its safety. The introduction of forward collision alert and lane departure warning ensured the driver could use that to sense any kind of danger ahead. The audio system was also updated, adding a dual charger USB port.

This year there were not cosmetic changes too. The different features that were added are; a revised 18-inch wheel appearance and Siri eyes free. The exterior colors Blue Velvet Metallic and Sable Metallic were made available where as Ebony was also available as an interior color unlike with the other previous models.

For safety precautions, all the Chevrolet Traverses have been installed with curtain side airbags, Anti braking System, and antiskid system, rear obstacle detection system, navigation system, traction control, remote engine stare, a rear-view camera, and rear climate control. All these are to ensure that the driver is warned about any danger on the roads.

These are the positive features that define the Chevrolet Transverse which have lead to high demand of these crossover SUVs. Just to add on the list, they are very comfortable.
All Facts are based on our research, always check lookseek facts in case of any errors. Lookseek is not responsible for any mistakes in this article.

Search the Web for More information on Chevrolet Traverse SUV at LookSeek.com Search