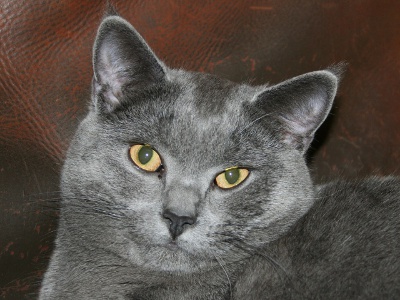 Description
The eyes of the Chartreux Cat breed are orange or copper colored. Chartreux Cat is relatively huge compared to the other breeds. Chartreux Cats head is structured with a tampered muzzle that makes them look as if they are smiling. The Chartreux Cat are great hunters and preferred by farmers.

Naming System
In the French cat naming system, every first letter of every pedigree denotes the year of birth. For cats that are born in the same year, they have official names that begin with the same letter. Every year, the code letters rotate through the entire alphabet. If a Chartreux Cat was born in the year 2011, it would have a name beginning with the letter G.

Behavioral Patterns
Compared to other cats, the Chartreux Cat are relatively quiet and rarely make noise. Whenever you hear the Chartreux Cat mew and cry, there must be something that Chartreux Cat is threatening or causing excitement. The are intelligent in their own capacity and are great observers. The Chartreux Cats learning cycle is very short and some of them can operate the on and off buttons of a radio while others can open the latches of screen doors.

The Chartreux Cat usually take around 2 years to attain adulthood. All through to their adult age, Chartreux Cat are known to be playful. Just like a dog, these cats can be trained to do a number of things around the house including fetching of objects. The Chartreux Cat mingle well with children and live in harmony with other animals. They love travelling and bonding with their owners. A Chartreux Cats has 30 teeth while a kittens has about 26 teeth that they will lose at about 6 months of age. A Chartreux Cat has the ability to jump up to six times its length.

Search the Web for More information on Chartreux Cat at LookSeek.com Search