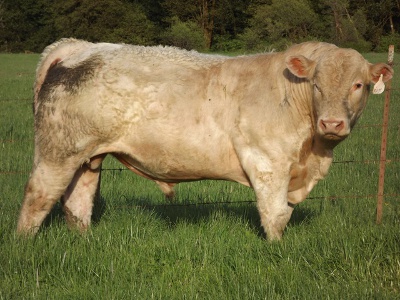 Facts about Charolais Cattle, The Charolais Cattle is one of the oldest French cattle breeds. It was developed in Charolles district in France, and was among the first of Europeans breeds introduced in Australia. It has become so popular in Southern USA, increasingly replacing the Hereford breed. "Fear of cattle is Bovinophobia". "Scientific name for cattle Bovine".

Description
The Charolais Cattle can either be white or creamy-white in color, though recently others have started breeding black and red colored. Some have horns, but of late polled breed is the preferred option particularly for cattle intended for feedlots, where horns are deemed dangerous to people or other animals. Charolais Cattle have long coat that is slightly wavy during the winter period, and sheds in spring to have a short and smooth coat. The Charolais Cattle chest is deep, the body is broad and has a strong well muscled hindquarters.

Characteristics
Just like the Hereford breed, Charolais Cattle are hardy cattle that are able to withstand the cold winters and the hot summers. Another of the Charolais Cattle breed advantage is that it grazes on pasture that many other cattle breeds can’t use efficiently to gain weight and muscles fast. The Charolais Cattle hooves are rugged making them able to walk on rough terrain easily. The cows calve so easily, one of its most priced traits. The calves are born with heavier weight compared to the other breeds.

Temperament
Though the Charolais Cattle have an aggressive appearance, they are simply docile and easy to rare.

With Charolais Cattle, there are two particular types that highly discouraged. The type which the bull is tall, flat sided and has a slack back with poor hindquarter. It cannot compete in the current beef industry. The other type is also a bull; it is double-muscled and has a heavy shoulder. This particular type of the breed has associated calving and associated fertility issues.
The Charolais Cattle is one of the best breeds to consider if you are looking to thrive in the beef production industry, it has less complication and handling issues. The Charolais Cattle is a hardy breed and should survive even in tough climatic conditions

Search the Web for More information on Charolais Cattle at LookSeek.com Search