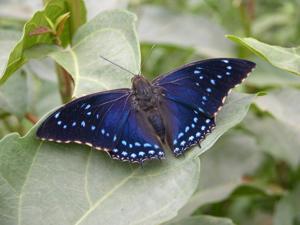 Charaxes butterfly have a strong thorax and stomach, with a wingspan, ranging from (8 cm to 10 cm) when fully grown. The ground colors of their wing uppersides range from yellowish-brown to black with whitish. Wing marks may be bars, spots or bands of orange, white or blue color. Some varieties of Charaxes have metallic blue marks and some others have an overall sparkling, metallic shine. Among the varieties of Charaxes butterflies, the Charaxes Eupale is light green in color and the Zingha variety is partly red in color. The male butterflies of the Charaxes Etheocles complex are mostly black and are called as the Black Charaxes.

Sexual dimorphism is extremely common among Charaxes such that both male and female species differ greatly in terms of shape and color. The female Charaxes butterfly have broader wings than that of the male ones. The hind wing of the female butterflies is less triangular and their tail is wider than that of the male butterflies. Some male Charaxes have only one tails, whereas the female ones have two tails.

Charaxes usually feeds the nectar of the flowers of a variety of wild plants and their caterpillars feed on the leaves of those plants. Usually, male butterflies encounter individually while feeding at droppings or fermenting fruits on the forest ground.

The average lifespan of Charaxes butterflies is less than 3 weeks irrespective of their species. Charaxes butterfly are insects. A Charaxes butterfly is a herbivore; Meaning that as a caterpillar its first food is its own eggshell and than it will eat the leaves of the plant on which it is hatched. When it becomes a butterfly, it will feed mostly on nectar from flowers, rotting fruit and water with a "proboscis" - a long narrow tube in their mouth that looks like a straw.

When caterpillars become fully grown they will attach to an appropriate leaf or small branch, than they will shed the outside layer of their skin and a hard skin underneath known as a "chrysalis" will be their new look
An adult Charaxes butterfly will come out from the "chrysalis" than it waits a few hours for its wings to dry and fill with blood, before it takes its first flight.

Search the Web for More information on Charaxes Butterflies at LookSeek.com Search