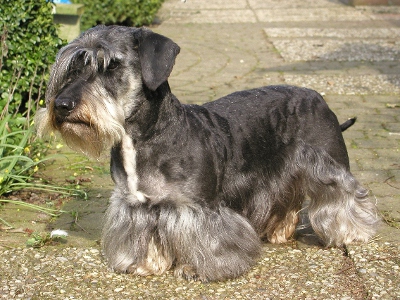 Cesky Terrier Dogs sweat glands are between their paw pads.
It is a Fact a Cesky Terrier Dog sees in color and have better low light vision. Cesky Terrier Dogs have three eyelids, a lower lid, an upper eyelid lid and a third lid, that is called a haw or nictitating membrane, this keeps the Cesky Terrier Dogs eye protected and moist. Dogs eyes have a special membrane for seeing better at night, called a tapetum lucidum - a dogs reflective layer in the choroid chiefly of nocturnal, causing the eyes to glow when light at night hits the eyes and they consist of some layers of smooth flat cells covered by a section of double deformed crystals.

The Cesky Terrier Dog coat is maintained by clipping its hairs in different shapes on the various body parts. Around the tail the hair should be “V” shaped and a “U” shape should be created on the neck, head, chest, shoulders and on the front legs. Do not clip the hair on the Cesky Terrier Dog fore-face especially on the mid eye to the lip line’s rear edge in order to leave room for brows and a beard.

The Cesky, pronounces as "ches-kee", Dr. Frantisek Horak combined the Sealyham Terrier Dog and the Scottish Terrier Dog and developed the Cesky Terrier Dog, he started the development in 1948. Dr. Frantisek Horak was recognition by 1963 by the Federation Cynologique Internationale, the well known European registration organization. The Czech breeder intended to have a breed that could be used to hunt in the Bohemian forests.

The Cesky Terrier Dog breed is among the six rarest breeds in the world. Over the years this breed has gained recognition from the entire kennel club’s in all English speaking countries.

The Cesky Terrier Dog is not as active as other terriers and it is also quieter. They are not very good pets especially where children are involved.

A Cesky Terrier Dog’s mouth can apply approximately 150 to 200 pounds of pressure per square inch and an American Pit Bull Terrier, German Shepherd Dog and a rottweiler can have 320 LBS of pressure on avg.

Search the Web for More information on Cesky Terrier Dog at LookSeek.com Search