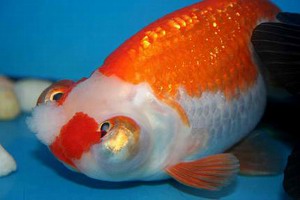 Facts about Celestial Eye Goldfish. "Scientific Name for Celestial Eye Goldfish Carassius auratus". The same species are conspecifics. When taken care of they grow at full Size that is between 5 and 6 inches (13 to 15 cm) and can live up to 5 to 10 years and sometimes up to 15 years. The Chinese named the Celestail "Stargazer", its believed to have been breed in the later part of the nineteenth century. The Japanese further breed Celestail Eyes and through selective breeding they developed it into a goldfish of today, with eyes that are permanently locked in an upward position. The Japanese call Celestail Eye goldfish the Deme-Ranchu.
They have a rounded egg-like-shaped body, the body is short and stubby and they have a double caudal (tail) fin and a double anal fin and no dorsal fin. There are no Celestail Eyes in the wild, they are all found in captivity. This is a very unique goldfish in the goldfish family.
The Celestial Eye goldfish is not recommended for beginners it is a rather delicate fish. It's one of the small goldfish, out of all the goldfish varieties. When the Celestial Eye goldfish are young they have normal eyes, but as they grow the eyes begin to protrude and the upturned visions develops. Celestail Eye goldfish come in in colors include black, white, orange, calico and red-and-white. They eat all kinds of flake, frozen and fresh foods.
The Celestial Eye goldfish poor vision makes it hard them to see their food, so they need extra time to feed. You must watch if there is other species of fish in your tank that are more aggressive goldfish that the Celestail get their fare share. Celestial Eye goldfish will do better similarly goldfish with handicapped such as Telescope Eye, Bubble Eye, Telescope, Lionhead and Black Moor goldfish.

Search the Web for More information on Celestial Eye Goldfish at LookSeek.com Search