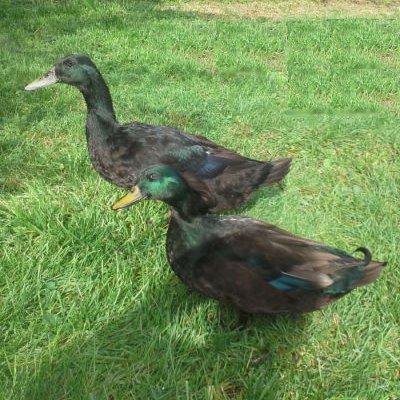 authors and Publishers on the establishment of the Cayuga Duck breed have made similar assumptions regarding the origin of the duck species. Most of them assumed that the Cayuga Duck was a cross between the pure American Black Ducks or a hybrid between the species and the Mallard including some of the domesticated varieties. The Cayuga Duck was for the first time kept in Dutches county NY by Mr Miller in the year 1809.

A Cayuga Duck is a Precocial (meaning) Born or hatched with the eyes open, a covering of hair or down, capable of a high degree of independent activity from birth and able to leave the nest just a few hours after hatching.

The Cayuga Ducks are related to swans and geese and the duck is the smallest of these birds with shorter wings and neck and a stocky body. Cayuga Ducks on average, live 4 to 8 years and can live up to 12 years, depending on the breed. Cayuga Ducks are omnivores; meaning - an animal that eats food of both animal and plant and origin.

"Scientific name for Cayuga Duck Anas Platyrhynchos" meaning - Wild dabbling duck from which domestic ducks are descended; widely distributed. From New Latin "anas" meaning (Duck) and the word Platyrhynchos comes from "platyrrhine", Ancient Greek meaning (broad snouted, flat-bridged nose).
Cayuga Ducks are birds in the Class of "Aves". Ducks of all types are part of the bird family "Anatidae". Cayuga Ducks are also called "waterfowls" they are generally found in places were there is water, such as ponds, rivers, streams, lakes and occasionally your back yard pool. The definition of Anatidaephobia is irrational fear that you are being watched by a duck.

The Cayuga Duck is loved by many since it is a great yard pet and it tends to stay close to its habitat and home. If you intend to breed the Cayuga Duck, it is important to consider the correct body type, large breast and good coloration. If you live close to breeders breeding the Peking breed species, you may find it impractical because of the loud quack produced by the breeds. However, the Cayuga Duck may be the best bird to domesticate in homes as the birds quack is not as loud except the females can be a bit vocal. The Cayuga duck breed has a docile temperament. The Peking duck has become the more popular breed of the two breeds in time.

The Cayuga Duck in most cases usually sit on and hatches her eggs. The eggs can be incubated and the incubation period lasts for twenty eight days. However, for successful incubation, the temperatures inside the incubator must be ninety nine Fahrenheit (37 cel) at eighty six percent humidity for the first day to the twenty fifth day and ninety eight Fahrenheit (36 cel) at ninety four percent humidity after the twenty sixth day to the twenty eighth day. A matured adult Cayuga Duck breed usually feeds on slugs, snails and a variety of insects.

A Cayuga Duck is a Precocial (meaning) Born or hatched with the eyes open, a covering of hair or down, capable of a high degree of independent activity from birth and able to leave the nest just a few hours after hatching.

Features about the Bill of Cayuga Duck

A "bill" is what is call a Cayuga Ducks mouth. There are no teeth in the ducks bill, they have rows of thin bristles, which helps them to filter pieces of nutrition out of the water. Cayuga Ducks swallow there food whole and it goes to an organ called a gizzard, were the food is first ground up and than moves on to the stomach. The different bill shapes and sizes for finding food, has over time mutated to fit each environment. The Cayuga Ducks bill is flat and broad and has rows of fine incision along the outer edge called "lamellae". meaning a thin membrane, plate, scale or layer, as of cell wall or bone tissue. The larnellae helps the Cayuga Duck to clutch food for feeding.

Underneath the water-proof coat are downy soft fluffy feathers which keep the Cayuga Ducks body warm. Cayuga Ducks keep clean by being able to turn their heads completely backwards, and put their beaks into their feathers by preening themselves.

Cayuga Ducks see in color with very good vision and can see well underwater. Cayuga Ducks have three eyelids the third eyelid called nictitating membrane. They have a top and bottom as well as a third eyelid that is found on the side of the eye. The Cayuga Ducks eyelid blinking acts as a windshield wiper to clear the eye. This helps to see when diving under water can also help the eye from drying out while flying. This is an act of constantly cleaning and keeping the eye moist.
Ducks fly in a “V” shape to makes flying easier.

The medium class Cayuga breed is a recognized breed of the American Poultry Association and has been accepted since the year 1874. The Cayuga Duck can develop to standard weights of about eight pounds (3.6 kg) for the male it's approximately seven pounds (3.1 kg) for the female duck.
The Cayuga Duck is characterized by a black coloration of plumage although it usually becomes beetle green in the correct light and a black colored bill. However, its ducklings appear to have black plumage. The Cayuga Duck has dark brown colored eyes, black toes and shanks apart from the old drakes which can have some orange shading.

In the wild the male Cayuga Duck will guard their nest by chasing away other ducks. Once the female Cayuga Duck lays 5 to 8 eggs, she will start to sit on her eggs to keep them warm so that they can hatch into baby ducklings. The eggs will hatch on average within 26 to 28 days. Baby Cayuga ducklings are able to fly within 5 to 8 weeks.
If raising Ducks, they will lay more eggs, when there is more daylight, that's why farmers will keep the lights on in the ducks house for longer periods of time.

Search the Web for More information on Cayuga Duck at LookSeek.com Search