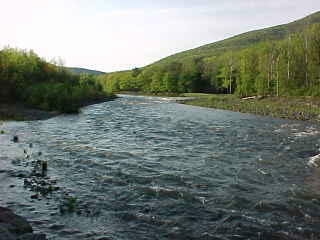 The Catskill Park is a mountainous region of public and private lands in Ulster, Green, Delaware and Sullivan Counties. 98 peaks over 3,000 feet from an impressive skyline. Its blend of public and private lands is typical of large parks in Europe, where people and unique lands have coexisted for centuries. This special and often remote mountain landscape was only occasionally used by native Americans. Later it was settled and heavily exploited by the Dutch, English, Irish and Germans. Its rich history includes logging, blue stone quarrying, leather tinning, wintergreen and blueberry harvesting, trapping, fishing, mountain house tourism, railroads, and even World War II pilot training. Over 60% of the lands in the Catskill Park are privately owned, the home of about 50,000 year round residents; the rest is publicly-owned " forest preserved. "

The Catskill Forest Preserve The Catskill Forest Preserve is the state land within the Catskill Park. Since its creation in 1885, it has grown from 34,000 to almost 300,000 acres. An 1894 amendment to the New York State Constitution (now Article 14) directs " The lands of the State now owned or hereafter acquired, constituting the forest preserve as now fixed by law, shall be forever kept as wild forest lands. They shall not be leased, sold or exchanged, or be taken by any corporation, public or private, nor shall the timber thereon be sold, removed or destroyed. " The forest preserve has thousands of acres of forests with meadows, remnants of old farmsteads, lakes, rivers, springs, waterfalls, cliffs, fire towers, bears, rattlesnakes and other wildlife, rare plants and animals. Also, there are hundreds of miles of abandoned wood roads and trails to enjoy. Today, it serves as watershed, recreation area and ecological and scenic reserve.

Geology The gray sandstone of the area formed some 360-400 million years ago when the Catskill region was a shallow sea filling up with clay and silt washing off the high mountains to the east. The sandstone have now been up lifted high above sea level, but the layers formed in a shallow sea are still visible. Streams have eroded valleys into this high plateau, forming the Catskill Mountains. Continental and valley glaciers have also left their mark, repeatedly covering the Catskills from two million to 10,000 years ago.

Protected by Article XIV of the New York State Constitution, the Forest Preserve is defined as public lands in the Adirondack and Catskill Parks within "forest preserve counties" as defined by the New York State Legislature. These lands are identified as [ECL 9-0101]"...lands owned or hereafter acquired by the state within the county of Clinton, except the towns of Altona and Dannemora, and the counties of Delaware, Essex, Franklin Fulton, Hamilton, Herkimer, Lewis, Oneida, Saratoga, Saint Lawrence, Warren, Washington, Greene, Ulster and Sullivan,..."

Forest Preserve lands are further broken down into categories based on their capacity to withstand use. These categories are defined in the 1985 (updated 2008) Catskill Park State Land Master Plan (CPSLMP) depending on which Park(s) they are found in. These classifications are:

[APSLMP and CPSLMP] A wilderness area, in contrast with those areas where man and his own works dominate the landscape, is an area where the earth and its community of life are untrammeled by man - where man himself is a visitor who does not remain. A wilderness area is further defined to mean an area of state land or water having a primeval character, without significant improvement or protected and managed so as to preserve, enhance and restore, where necessary, its natural conditions, and which

[CPSLMP] A wild forest area is an area of Forest Preserve land whose character as a natural plant and animal community receives the same degree of protection under Article XIV of the Constitution as in areas classified as wilderness, but which differs from wilderness in that generally:


Fire Towers in the Catskills

For nearly a century, observers watched the forests of New York State-including the Catskill and Adirondack forest preserves-from more than 100 fire towers perched atop the highest peaks, searching for the dangerous, telltale signs of forest fires. In the Catskill region alone, there were 19 towers.
Beginning in the 1980s, the State of New York began to phase out the use of fire towers for spotting forest fires, and in 1990, the last observer ended his watch in the Catskills at the Red Hill Fire Tower in Claryville. Over time, the towers and their associated observers' cabins began to deteriorate, and those that were not dismantled were closed to the public for safety reasons.
Early in 1997, a grassroots, volunteer-based initiative formed to try to save the towers. Recognizing that the towers not only represent a piece of the history and heritage of the Catskill Forest Preserve, but are an untapped resource with tremendous tourism potential, the Catskill Fire Tower Project was born as a joint initiative of The Catskill Center for Conservation & Development and DEC.
Through the dedication of countless volunteers, as well as assistance and support from DEC staff, the last of the five remaining Catskill towers was restored and reopened to the public in 2000. Since then, volunteer-based committees organized for each of the towers have continued to maintain the structures, and in many cases renovate the observers' cabins as well. Today, a network of more than 100 volunteers also act as "summit stewards" by greeting visitors on weekends from May through October. Fire Tower Locations

This is the newest of the five towers left in the Catskill Park, having been at its present location since only 1950. However, the tower itself is much older as it was originally constructed in 1927 on Gallis Hill, just west of Kingston. The Overlook tower reaches 60 feet in height, and offers incredible views of the Hudson River Valley, Ashokan Reservoir, and Devil's Path.

This tower has the unique distinction of being located at the highest elevation of any fire tower in New York State. The original tower on Hunter Mountain-constructed of logs-was built in 1909, and was the first of three fire towers constructed in the Catskills that year. The original tower was 40 feet tall, and was replaced with a steel tower 60 feet high in 1917. That tower was originally placed at an elevation of 4,000 feet-a third of a mile from the true summit-but was removed and reset at its present site on the true summit in 1953.

Directions: Take the Spruceton Trail, marked with blue disks, from Greene County Route 6 (Spruceton Hollow Road) in the hamlet of Spruceton. A seven-mile moderately-difficult round trip hike. Or take the yellow-marked trail from the Hunter Mt. Sky Ride when it is open-a moderate four-mile round-trip hike.

The Red Hill Fire Tower stands 60 feet tall, has nine flights of stairs, and was constructed in 1921. This tower affords an unsurpassed view of the Catskill high peaks to the west and north, and the Rondout Reservoir to the southeast. It was the last fire tower staffed in the Catskills, closing in 1990.

The first forest fire tower in New York State was erected on Balsam Lake Mountain in 1887. Built of wood by the Balsam Lake Club, it survived until 1901 and was replaced with another wooden tower in 1905. Telephone lines, a small observer's cabin and a road to the summit were added in 1909 when the state took it over. The first steel tower was erected in 1919, and the present steel tower (47 feet tall) was built in 1930.

This fire tower is believed to be the original structure built circa 1917, and was used for fire observation until 1971. The 47-foot tower was placed in its present location because of the vast sections of forest preserve not visible from either the Hunter or Belleayre fire towers.