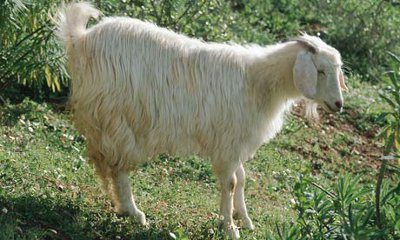 The Cashmere Goat breeds are healthy animals, trouble-free to develop and need minimal care. The Cashmere Goat are not hurdlers similar to several other goat varieties and normal woven rope sheep fencing will include them. Minimum shelter is required to accommodate the Cashmere Goat because of the insulating features of their double coat that sheds seasonally.

Cashmere Goats come in different colors, which make a group of Cashmere Goats appear similar to fairly an assortment. Goats with white-colored face are inclined to be dominant, but brown, black, red, grey, cream and badger faced goats are extremely common. The Cashmere Goat may also have either long or short protector hair.

The average lifespan of the Cashmere Goat breed ranges from 10 years to 12 years. The goat is one of the 12 animals in the Chinese zodiac.

Goats can even climb trees because they have great balance and some goat species can jump over 5 feet high. A Cashmere Goats eyes are rectangular rather than round. At night they have excellent vision and can due just as much at night. A goat herder notice how much energy his goats had, after eating coffee bushes and that's how coffee was first discovered. There are over 210 breeds of goats in the world. Cashmere Goats have no teeth in their upper front jaw. Cashmere Goats have 24 molars and 8 incisors. Both sexes, female and male goats can have beards. Male Cashmere Goats reach puberty at the age between 4 to 8 months and the female Cashmere Goat is between 7 to 10 months. Male goats at the beginning of mating season go through a period called a "rut". The "rut" is the beginning of the courting for a doe, a very strong foul musky odor and fighting between bucks begins. Goats can be born without or with horns "polled". Cashmere Goats have a four chamber stomach, goats are "Ruminant" is any hoofed even-toed mammal, that digests its food in two stages. First by eating the raw materials and regurgitating a semi-digested form known as "cud" (ruminating: chewing the cud.) then eating the cud. "Wattles" is that little tufts of hair that dangles from the goats throat. Goats milk is higher in niacin, calcium and vitamin A than cows milk. A goat is a herbivores, that eats leaves, grass, hay and furns {plant eaters}

Tetanus is something to watch out for in Cashmere Goats and what are the proper shots to give them, (Tetanus-is an illness that is caused by Clostridium Tetany). Also do the research on de-worming your young Cashmere Goats (kids) and do the research on the proper doses. Also look up "Cocci" (If your fecal test shows an high rate of cocci (over 200 per gram) you need to take action quickly with your young (kid). These are important facts so do your research on this if you are raising Cashmere Goats, especially young Cashmere Goats (kids). Capra aegagrus hircus was derived from the Wild Goat (C. aegagrus). In latin "Capra" is the root of the word "capricious" which means whimsical, mischievous, quirky, bizarre and suitable to change fast.

Search the Web for More information on Cashmere Goat at LookSeek.com Search