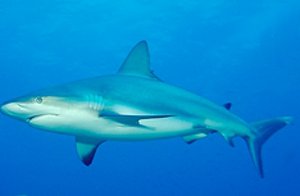 The Caribbean Reef Sharks are known to be active mostly at night and they do not change in behavior regardless of the season. The Juveniles maintain a rather localized interaction with the environment while the adult Caribbean Reef Sharks roam about covering wide stretches of water areas.

The gestation period the Caribbean reef shark is one year. The females are very productive and they become pregnant every year. The average litter size is around 4 to 6 and the newborn Caribbean Reef Shark measure more than 29 inches (74 cm) in length. Once the developing embryos exhaust the yolk which is their primary food supply, the yolk sac develops into a placenta and a channel through which they receive nourishment from the mother Caribbean Reef Shark. Male Caribbean Reef Shark become sexually mature at around 4 feet 9 inches to 5 1/2 feet (1.5 to 1.7 meters) while their female counterparts mature 6 1/2 to 10 feet (2 to 3 meters).

Search the Web for More information on Caribbean Reef Shark at LookSeek.com Search