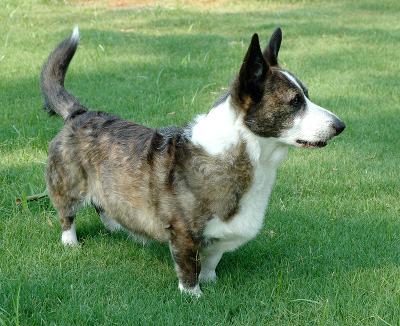 Apart from being used as pets and farm dogs, the Cardigan Welsh Corgi Dog are believed to be very good watchdogs. This is because they are active and they can approach an enemy who tries to disturb their peace.
The life expectancy of the Cardigan Welsh Corgi Dog is believed to be from 12 to 15 years. When it comes to breeding, a litter contains around 2 to 4 pups. The size of the litter may vary from small to larger.

A Cardigan Welsh Corgi Dog’s mouth can apply approximately 150 to 200 pounds of pressure per square inch and an American Pit Bull Terrier, German Shepherd Dog and a rottweiler can have 320 LBS of pressure on avg.

A Cardigan Welsh Corgi Dogs can hear a sound at four times the distance of a human. Sound frequency is measured in Hertz (Hz) Def-Hertz is the measurement of frequency, explicitly it's one cycle per second. The higher the Hertz are, the higher the pitched the sound is. Dogs hear best at 45,000 Hz to 65,000 Hz, while humans hear best at around 20 Hz to 20,000 Hz.