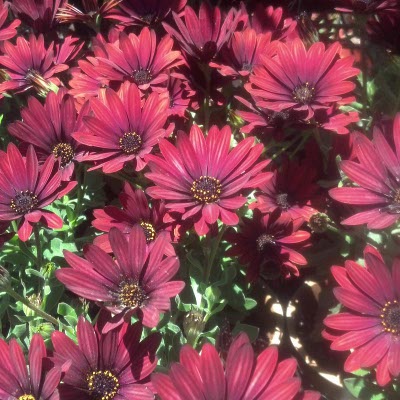 Facts about Cape Daisy shrub. "Scientific name for Cape Daisy plant is Osteospermum". Cape Daisy plant is a flowering plant which comes from the genus Dimorphotheca. This genus exhibits similar characteristics with the small genus Chrysanthemoides like the C. monilifera and the C. incana. The Cape Daisy plant which is native to the African continent has fifty naturally grown species including thirty five species to the southern parts of Africa. However, some of the species are also grown in the Arabian Peninsula. The shrub is a hardy perennial plant which is not suitable for outdoor conditions.

The Cape Daisy shrub produces foliage which come with various leaf types including lanceolate and rarely variegated leaf forms. The Cape Daisy shrub leaves have an alternate arrangement, have entire margins and are green in color. However, some of the leaves produced by the hardy types of the plant species have their margins toothed.

The Cape Daisy shrub produces flowers which are composite and have disc florets with female-ray florets. The flowers have their ray florets developing singly at the tip of its twigs or in the inflorescence of terminal cotymbose cymes. Cape Daisy shrubs pseudo-bisexual disc florets come in various colors including yellow, purple and blue. However, the hardy daisy shrubs exhibit dark blue colors in the center of their discs until the pollen which is yellow in color are shed off. The female ray florets usually have wide range of colors including cream, pink, purple, yellow, white and mauve. The Cape Daisy shrub usually flowers in late summer with the hardy types flowering in spring without subsequent flowering.

Search the Web for More information on Cape Daisy Plant at LookSeek.com Search