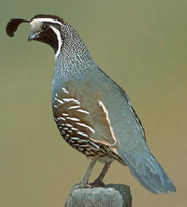 The California quail is a small, plump bird with a short black beak. The male has a gray chest and brown back and wings. It has a black throat with white stripes and a brown cap on its head. The female has a gray or brown head and back and a lighter speckled chest and belly. Both the male and the female have a curved black crown feather on their foreheads. The male's crown feather is larger than the female's. It is the state bird of California
The range of the Valley Quail is gfrom British Columbia south through California, eastward into Idaho and Nevada.

The habitat of the Valley Quail is found in they dry, scrub area in the south portion of their range, north through grasslands and orchards to the very wet Pacific Northwest. The California quail eats seeds, plant parts like buds and sometimes insects and feed in flocks in the early morning.

Valley Quail ore often confused with the Gambel's Quail at first glance, but closer observation shows that the male is slightly smaller, but share the tear-drop shaped, black crest. The face and throat is black, bordered a white stripe above the eye and along the throat; there is a small patch of yellow feathers at the base of the bill. The back of the neck and head is finely mottled with black, gray and white; the breast and upper back bluish-gray. The belly has a blackish-chestnut patch that is surrounded by black buff feathers that give a scaly appearance not seen in the Gambel.

The California quail lives in coveys of 10 to 200 birds in the winter. They will stay in these flocks until they pair off during mating season.
The breeding season for the Valley Quail April to June with a clutch size of 12-14 eggs and a incubation period of 23 days.

Search the Web for More information on California Valley Quail at LookSeek.com Search