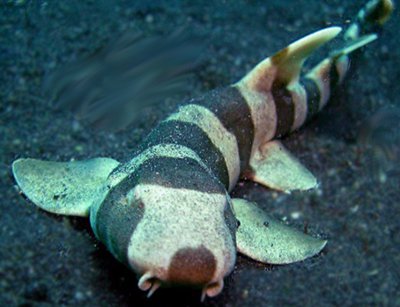 Burmese bamboo Shark has a long, cigar-shaped body and has a remarkably long tail which a bit longer than its entire body.

This type of shark owns a long distinctive snout. Burmese Bamboo Sharks pectoral and pelvic fins are kind of thin and are not very muscular. There is no distinct color pattern associated with this species of shark.

They also have many “cirri” on top of their heads. These small, fleshy skin flaps help the Burmese Bamboo Shark to camouflage.

Burmese Bamboo Shark is majorly found in the Northeastern part of Indian Ocean. It has been observed at depths close to 110 ft (33.52 meters). The Burmese Bamboo Shark are not a very active species and will prefer to rest on the sea floor, which includes burying themselves under the sand as they are equipped to breathe easily in such circumstances.

The social behavior of the Burmese Bamboo Shark species has not been researched well, however, a known speculation is that they are a solitary fish and doesn’t typically socialize with one another or hang around in large groups.

In regards to the breed’s small sized body, it doesn’t consume much. The Burmese Bamboo Shark will only hunt small prey and are thought to feed mainly on invertebrates and small bony fish.

Burmese Bamboo Sharks are calm and are considered to be harmless creatures.

Search the Web for More information on Burmese Bamboo Shark at LookSeek.com Search