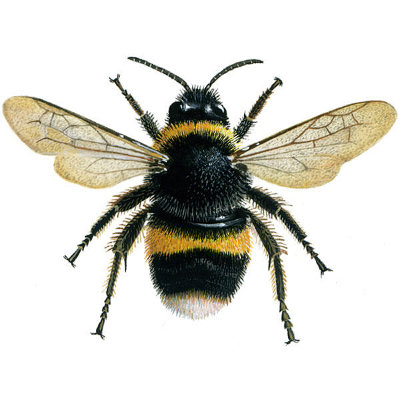 Facts about Bumblebees, the Bumblebee is generally any type of bees that belong to a genus known as the Bombus, in family Apidae. Currently there are about 250 species that exists primarily in Northern Hemisphere though they can also be found in South America. Bumblebees can also be found in New Zealand and Australian state of Tasmania.

The bumblebees are characterized by yellow and black body hairs that are often in bands, though some species do have red or orange and some are entirely black bodied. One other feature is the soft nature of its hair that is called pile; it covers the entire body of the bee giving it a fuzzy appearance.

Just as their close relatives the honey bees, the bumblebees do feed on nectar as they gather pollen that is used to feed on their young ones.

The Bumblebees exhibit bee pollination syndrome as they visit patches of flowers even up to a distance of 2 km (1.2 miles) from their colony. When foraging, they can get to speeds of up to 15 meters (49 feet) in just one second.

The Bumblebees have a long tongue that is used to extract nectar and then store it in their crop. Most species of the bumblebees will also exhibit what is known as nectar robbing. In such a case the bee does not insert its mouth-part in the flower as normal; instead it will bite directly on the base of the corolla in order to extract nectar while avoiding nectar transfer. A few species of the bumblebees will also live a scent marks on the flower it visits meaning no other bee will visit that flower until the scent reduces.

For the temperate zone species, during the autumn, the young queen Bumblebees will mate with the drones and then diapauses during winter in the sheltered area either in the ground or in a man-made structure. In early spring the queen appears from the diapause and searches for a suitable place that it can create its colony. After the Bumblebee finds a place it builds its wax cells where it will lay its fertilized eggs.

Bumblebee queen and worker can sting. Unlike the honey bee’s stinger, the bumblebee’s doesn’t have barbs and thus it can sting repeatedly. Generally, the bumblebees are not normally an aggressive species, but they will always defend their nest or sting in self-defense. A female cuckoo bumble bee is quite interesting it can aggressively attack colony members and sting the queen but it will ignore humans or other animals unless they are disturbed.

The bumblebees will form colonies; though their colonies are less extensive compared to the honey bees. Basically, this is due to the nest cavity size, the responsibility one female has of constructing and reproducing in the constructed nest and a colony is restricted to just one season. Generally, a mature nest can hold not more than 50 individuals. A bumblebee nest can easily be found within the tunnels in ground and are probably abandoned by other animals. They at times construct wax canopy over their nests for insulation and protection.

A Bumblebee has two stomachs, the first stomach is for eating and the other stomach is specially designed for storing nectar collected from flowers and water, for making it possible to carry it back to the hive.
Bumblebees fall in the classification of insects with six legs. Bumblebees have five eyes; three tiny ocelli eyes and two compound eyes.
There are three types of bees in the Bumblebee hive, a Drone, Worker and the Queen.
The hind legs of the Bumblebees carry pollen in them and it is called a pollen baskets. Pollen is the protein for which the baby bee needs to grow.
The Bumblebees have four stages of life, Eggs, Larvae, Pupae and Full grown Bee.

Search the Web for More information on Bumblebee at LookSeek.com Search