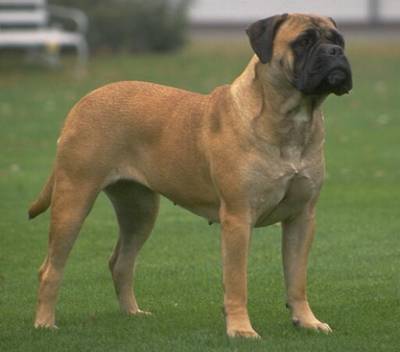 Facts about Bullmastiff Dogs, "Scientific name for Bullmastiff Dog, or domestic canine, is Canis lupus familiaris". The Bullmastiff Dog is a powerful looking dog at first glance. They are massive, and with his powerful stance and solid body frame, Bullmastiff Dogs can be quite intimidating to any kind of person. In fact, he is one of the largest breeds of dogs all over the entire world. Nonetheless, with is muscular body, the Bullmastiff Dog is relatively docile, intelligent and he can be a good a good family companion way beyond many people expect. its stocky build makes the dog to look rigid but in reality, the Bullmastiff Dog is an agile good hunting dog. Bullmastiff Dogs sweat glands are between their paw pads.
It is a Fact a Bullmastiff Dog sees in color and have better low light vision. Bullmastiff Dogs have three eyelids, a lower lid, an upper eyelid lid and a third lid, that is called a haw or nictitating membrane, this keeps the dogs eye protected and moist. Bullmastiff Dogs eyes have a special membrane for seeing better at night, called a tapetum lucidum - a dogs reflective layer in the choroid chiefly of nocturnal, causing the eyes to glow when light at night hits the eyes and they consist of some layers of smooth flat cells covered by a section of double deformed crystals.

A Bullmastiff Dog’s mouth can apply approximately 150 to 200 pounds of pressure per square inch and an American Pit Bull Terrier, German Shepherd Dog and a rottweiler can have 320 LBS of pressure on avg.

The Bullmastiff Dog is broad, short head possess a wrinkled skin on the surface. The muzzle is dark in color and it is usually broad and deeply set. With the head clearly marked by a black nose and focused hazel eyes, the Bullmastiff Dog have widely set, black, v-shaped ears. The backline is short and straight and it lays in the same position as wither and the loin. Its tapering tail is usually set high while his teeth meet at scissors bite.

The Bullmastiff Dog coat is thin, short often rough, and covered with various color patterns. These colors are always set in such a way that they are consistent in texture and length throughout the body. The acceptable coat colors for the Bullmastiff Dog include brindle, rich red, fawn, reddish brown, light brown or red-fawn. Any white colors isn’t acceptable among the Bullmastiff Dogs except on the chest. They weigh between 100 to 140 pounds (45.3 to 63.5kg), with the females being smaller than the males.

Average body temperature for a Bullmastiff Dog is between 101 to 102.5 degrees
Female dogs are in heat for matting for about 20 days twice a year. Female Bullmastiff Dogs are pregnant for 60 days before they’re puppies are born.
A Bullmastiff Dog is an omnivore, (definition-they eat both other animals and plants). All Dogs are direct descendants of wolves.

The number one heath problems amongst Bullmastiff Dogs is obesity, so always make sure your dog doesn't get to fat. Many foot problems that Bullmastiff Dogs have are just an issue of long toenails. Although he can contract hip dysplasia, hypothyroidism, retinal atropy and lymphoma, he is generally a healthy dog. He requires minimal grooming since his coat his thin.

Search the Web for More information on Bullmastiff Dog at LookSeek.com Search