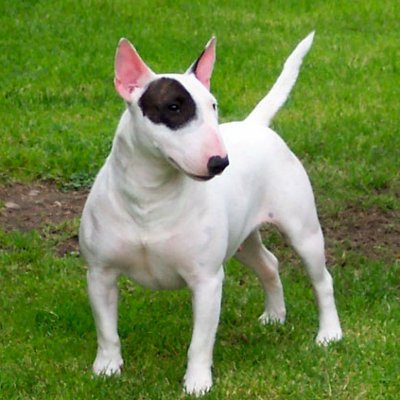 Facts about Bull Terrier Dogs, "Scientific name for Bull Terrier Dog, or domestic canine, is Canis lupus familiaris". The Bull Terrier Dog is a clownish, playful and a good looking dog. Its disposition makes him look like an unapproachable dog but in reality, it is very friendly and humorous. Bull Terrier Dog is popular because of his muscular body and his agility in the show rings. Many Bull Terrier Dogs resemble the cavalier gladiator with their powerful jaws matching its unique shaped head and keen facial complexion. Bull Terrier Dog skin is taut while his coat on the other hand is short and flat with a smooth and an easy gait. Bull Terrier Dogs sweat glands are between their paw pads.
It is a Fact a Bull Terrier Dog sees in color and have better low light vision. Bull Terrier Dogs have three eyelids, a lower lid, an upper eyelid lid and a third lid, that is called a haw or nictitating membrane, this keeps the Bull Terrier Dogs eye protected and moist. Dogs eyes have a special membrane for seeing better at night, called a tapetum lucidum - a dogs reflective layer in the choroid chiefly of nocturnal, causing the eyes to glow when light at night hits the eyes and they consist of some layers of smooth flat cells covered by a section of double deformed crystals.

The Bull Terrier Dog breed has a well-rounded body, having short, strong back coupled with strongly built and muscular shoulders. Bull Terrier Dogs head is long and strong with an over-looking shape. With the almost flat-topped head sloping evenly down to the black nose with no stop, its long neck and shoulders are muscular and strongly built. While Bull Terrier Dogs eyes are deeply set and almond-shaped, the ears are small, thin and align themselves close to each other. The lowly-set tail is thick at the base and tapers all the way to the tip. Standard Bull Terrier Dog average height is 20 to 24 inches (50.8 to 60.9 cm). The average weight is 45 to 80 pounds (18.1 to 36.2 kg)

Bull Terrier Dogs have two times the amount of ear muscles than people. It is a fact a Bull Terrier Dog can hear a sound at four times the distance of a human. Sound frequency is measured in Hertz (Hz) Def-Hertz is the measurement of frequency, explicitly it's one cycle per second. The higher the Hertz are, the higher the pitched the sound is. Dogs hear best at 45,000 Hz to 65,000 Hz, while humans hear best at around 20 Hz to 20,000 Hz.

Bull Terrier Dogs require little grooming but eyes and ears should be checked regularly for infections.
The Bull Terrier Dog may live up to 14 years if they are kept healthy under correct diet and medication.

A Bull Terrier Dog’s mouth can apply approximately 150 to 200 pounds of pressure per square inch and an American Pit Bull Terrier, German Shepherd Dog and a rottweiler can have 320 LBS of pressure on avg.

Average body temperature for a Bull Terrier Dog is between 101 to 102.5 degrees

Search the Web for More information on Bull Terrier Dog at LookSeek.com Search