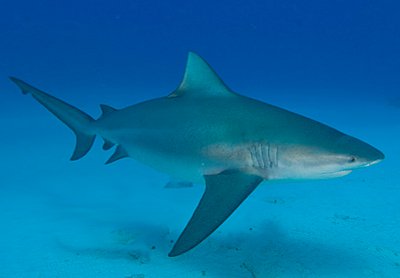 The Bull shark has a stocky figure, with a darkish body at the back and lightening up to whitish towards the belly and the Bull Shark has a broad snout that is flat. The Bull Shark reach maturity at about 10 years; the adults are about 7 to 11 1/2 ft (2.1 to 3.4 meters) long and will weigh 200 to 500 lbs (90.71 to 226.8 kg) pounds. The female Bull Shark are generally large in comparison to the males and they also live longer.

Most male may live for about 13 years, and about 17 years for females.

The Bull Shark is a special predator and likes to migrate quite a lot. The Bull Shark are common in several areas including; some fresh water lakes, rivers, and Oceans. The Bull Shark prefer warm and moderate deep waters about 150 – 500 ft (45.72 to 152.4 meters).

It has been noted that the bull shark favors the Pacific, Indian, and Atlantic Oceans. And their favorite rivers include; Barhamputra River, Mississippi River, Brisbame River, Ganges River, and the Amazon River.

The Bull shark is considered to be one of the most social species and can sometimes hunt in bigger groups. Not much is currently known about their social structure, but it is believed that female Bull Shark have dominance over their male counterparts.

The Bull Shark is carnivores, meaning: an animal that feeds on flesh (Meat). The Bull shark eats almost everything. They prefer turtles, small sharks, bony fish, some species of dolphins, and birds.

The Bull Shark is among the 3 shark species that are known to attack the humans even when unprovoked, though attacks are very rare. The Bull Shark is also not hunted much by people.
There are over 400 types of sharks, Sharks have the most powerful jaws on on earth. Bull Sharks jaws, both the upper and lower jaws move. Bull Sharks skin is made of denticles instead of scales like other fish. The denticles are constructed like hard, sharp teeth (tooth-like projection) and this helps to protect the Bull Shark from being injury. "Scientific name for Shark Selachimorpha"
"Fear of Sharks Selachophobia".

Search the Web for More information on Bull Shark at LookSeek.com Search