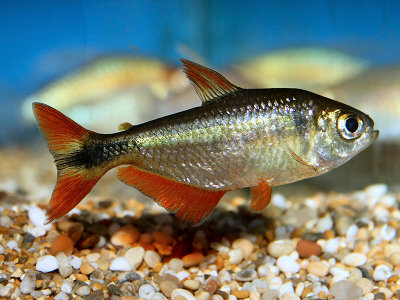 Buenos Aires Tetra is a variety of fish that is a native to Argentina. This fish variety can be largely found in both salt water and freshwater. It is one among the largest fish in the tetra varieties. This fish variety is an inexpensive and undemanding variety of fish. However, it is better to keep away this fish from delicate and shy varieties because this fish is a fin nipper.

The Buenos Aires Tetra is a large fish that has the maximum body length of 7 cm. It has metallic-colored body, with a black-colored marking on the dorsal fin and red-tipped fins. The body of the fish has a thin blue line that starts at the back of the gill and ends at the tail fin, where there is a black-colored, diamond-shaped mark. The fins of the fish are orange-red in color, and a spray of red can be found at the top of its eye. Male breeds have brighter red fins than the female ones, and they are generally more vibrant overall, particularly during spawning. Female fish are broader and larger with a rounder stomach. A number of color variations of the Buenos Aires Tetra fish have been developed, including the one that has a yellow-colored tail, and an albino variety.

The Buenos Aires Tetra has a tendency to consume aquarium plants. This fish variety has alike diet to most tetra varieties. It feeds on flake and dried foods, in addition to vegetable stuff. This fish breed consumes more food than most little aquarium fish. The Buenos Aires Tetra breed is also fairly attached to live foods, such as daphnia, bloodworms and mosquito larvae.

The Buenos Aires Tetra fish varieties are simple-to-breed egg dispersion fish that can be spawned in clusters or in pairs. If they spawned in a cluster, they use the equal amount of females as males. Spawning fish is supposed to be formed well with live foods before spawning attempts.

The average lifespan of the Buenos Aires Tetra fish is 5 years.

Search the Web for More information on Buenous Aires Tetra at LookSeek.com Search