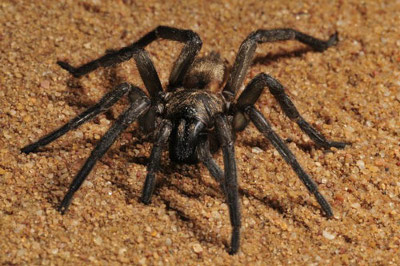 Brush-footed trapdoor spiders live in burrows built within the ground, although you can find some of them on trees and they can be recognized with a trapdoor entrance. Their burrows are quite common in suburban gardens and plantations. Western Australia has listed the Brush-Footed Trapdoor Spiders under the short range endemics category, which means the Brush-Footed Trapdoor Spiders are found in limited areas and they might face extinction because of the mining activities.

Mining activities and reducing suburban plantations have endangered this species and it is important to spread awareness about them so that they are not killed on sight. Brush-footed trapdoor spider rarely bites and unless you try to pick it up, it will not harm you.

A Brush-Footed Trapdoor Spiders stomach can only take liquids, so a spider needs to liquefy their food before they eat. They bite on their prey and empty its stomach liquids into the pray which turns it into a soup for them to drink.

Search the Web for More information on Brush-Fottoed Trapdoor Spider at LookSeek.com Search