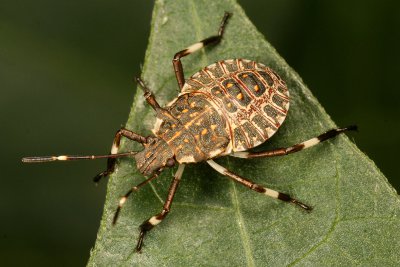 This species is part of the Pentatomidae family and the Hemiptera order. The Brown Marmorated Stink Bug are considered “true” bugs because they have proboscises.
Stink bugs are about two thirds of an inch (1.67 cm) long and equally wide. Their shield-shaped shells are mottled brown, white, gray, black and blue. Immature stink bugs are yellow to black and darken over time. Their legs are brown with some lighter mottling. The Brown Marmorated Stink Bug have brown and white banding on the antenna. The stink they emit come from glands on the underside of the thorax between the first and second pairs of legs. While the chemical is sprayed to deter predators, the insects may release it simply when moved or when the insect is injured.

The Brown Marmorated Stink Bug have six legs in all. These insects have proboscis to pierce a plant to eat or drink from it. This feeding method creates dimples on the leaves or fruit on which they feed, sometimes killing the plant in that area and possibly spreading disease to the crops. Brown Marmorated Stink Bugs in the U.S. start feeding on fruits and vegetables in the May and June time frame.

The Brown Marmorated Stink Bug are more likely to enter people’s homes in the fall to find shelter before winter. They can fit almost anywhere that a roach could, such as holes under doors or through window frames. When in the home, the Brown Marmorated Stink Bug will usually enter a state of hibernation unless the temperatures of the home get high enough to trick them into becoming active again. The horror is when hundreds or thousands come out of hibernation and start looking for a way outside, gathering on the walls in search of an exit, emitting the horrible smell if swatted at, stepped on or simply disturbed.
One method of killing Brown Marmorated Stink Bugs with minimal stink is capturing live ones before putting them in a large jar or small bucket filled with soapy water.

You have to flick it into the soapy water quickly, because some species can fly. Or pick them up while wearing disposable gloves, though this means the Brown Marmorated Stink Bug may spray your hand. The surface tension of the soap and water makes this more challenging, as the soap blocks the pores in their shells they use to breathe. They’ll drown in half a minute.

Another option is to spray Brown Marmorated Stink Bug with soapy water. The soap will interact with the bug’s shell, eventually clogging up the pores they use to breathe. It takes longer than simply drowning them, but it works when you don’t want to get closer than spray bottle length.

You can use insecticides to kill Brown Marmorated Stink Bug only if the insecticides specifically include stink bugs. Not all insecticides work on this species.
Flush the dead stink bugs down the toilet so they don’t stink up the trash.