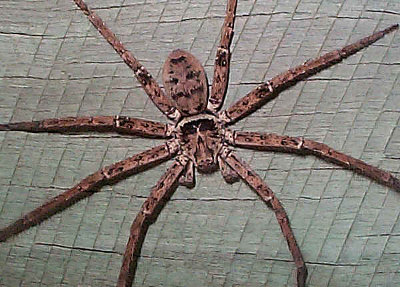 Facts about Brown Huntsman Spiders, Scientific name for Brown Huntsman Spider is Heteropoda jugulans". The brown huntsman spider belongs in the Sparassidae Family which was formerly known as Family Hetropodidae. They are popularly known for being hairy. They are also known for terrifying and scarring people by popping out behind the curtains. Brown huntsman spider has long and large legs. They are normally brown in color or at times you can get those that are grey in color. At times they have banded legs. These are some of the features that you can use to identify this kind of huntsman spiders.

Adaptations of a Brown Huntsman Spider

The Brown Huntsman Spider bodies are normally flattened. This is an adaptation that they have got so that they can be able to survive in narrow spaces, rock crevices or under loose bark. Their legs also assist them to hide. This is because instead of their legs bending vertically like their body, they have twisted joints. These joints helps the Brown Huntsman Spider to spread out laterally and forward just like a crab.

The brown huntsman spider has a less flattened body as compared to the other huntsman spiders. It also has got patterns in motley white, brown and black. The Brown Huntsman Spiders can grow to be very big. They can be as big as a human beings palm or even bigger. Their body can measure up to 3/4 inches (2 cm) for the females or 5/8 inches (1.6 cm) for the male spiders. Their legs can be as long as 5 7/8 inches (15 cm).

Distribution, habitat and feeding of Brown Huntsman Spiders
Brown huntsman spiders are highly distributed in Australia. They live in terrestrial habitats. Mostly, the Brown Huntsman Spider live under the unsuspected loose barks of trees, in cracks of rock walls and in logs. Other places you can find them are under the slabs and rocks of bark on the ground and on foliage. At times the brown huntsman spider enters the house and at times it is naughty enough to enter the car. Once it does this, it is found running across the dashboard or behind the sun visors. It feeds on insects and invertebrates. It is carnivorous, arthropod feeder and insectivorous. This is just but the least information about this crawling creature. It has much information that we cannot exhaust through writing.

Brown Huntsman Spiders have oversize brains.
In the Brown Huntsman Spider the oxygen is bound to "hemocyanin" a copper-based protein that turns their blood blue, a molecule that contains copper rather than iron. Iron-based hemoglobin in red blood cells turns the blood red

A Brown Huntsman Spiders stomach can only take liquids, so a spider needs to liquefy their food before they eat. They bite on their prey and empty its stomach liquids into the pray which turns it into a soup for them to drink.

Search the Web for More information on Brown Huntsman Spider at LookSeek.com Search