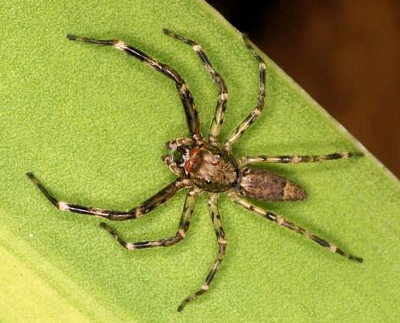 Facts about Bronze Jumping Spider, "Scientific name for Bronze Jumping Spider is Helpis". Bronze jumping spiders are brown and cream in color and normally found under leafs of certain trees and known for their taste for small insects. The type of spider is about 10 mm long, thick and strong and very adaptive to its surrounding in terms of survival.

The favorite foods for a bronze Jumping spider are basically moths and other delicious insects that may come across its way, may survive the purpose of quenching its hunger.

The Jumping spider is characterized in living in isolated places where it can breed freely away from its predators; the bronze jumping spiders build silk egg sacs in leaves with their main habitat as foliage.

A Bronze Jumping Spiders stomach can only take liquids, so a spider needs to liquefy their food before they eat. They bite on their prey and empty its stomach liquids into the pray which turns it into a soup for them to drink.

Below is a general information about the bronze jumping spider as per animal classification is concerned:

The bronze Jumping spider is a small but very fuzzy when it comes to jumping and targeting it’s pray, with the fanciful eight strong legs, its very are they miss their target when hunting. They also have the ability to use their beautiful legs to a zigzag lap dance whenever possible to impress their female friends.

This type of species in the kingdom animalia not only impresses but also comes in every color, the size and color entirely depends on its immediate environment and exposure.

Bronze Jumping Spiders have oversize brains.
In the Bronze Jumping Spider the oxygen is bound to "hemocyanin" a copper-based protein that turns their blood blue, a molecule that contains copper rather than iron. Iron-based hemoglobin in red blood cells turns the blood red

Mother Nature has much to offer as per both big and small animals in our planets are concerned. It’s not very common to come across this type of spider just anyway in the world, as some of this rare species faces extinction and change environment makes it tough to survive.

The bronze jumping spider is the most known and beneficial Arachnida since it not only can jump but also can entertain you as you enjoy its natural beauty and color.

Bronze Jumping Spiders have two body parts, the front part of the body is called the Cephalothorax-(the thorax and fused head of spiders). Also on this part of the body is the spider’s gland that makes the poison and the stomach, fangs, mouth, legs, eyes and brain. Spiders also have these tiny little leg-type things called (pedipalps) that are next to the fangs. They are used to hold food while the spider bites it. The next part of the Bronze Jumping Spiders body is the abdomen and the abdomens back end is where there is the spinnerets and where the silk producing glands are located.

Search the Web for More information on Bronze Jumping Spider at LookSeek.com Search