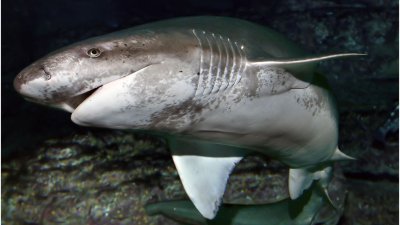 The Broadnose Sevengill Shark is a coastal shark that usually prefers to stay in waters less than 165 ft (50.2 meters) deep, estuaries and in bays; often less than 3 ft 2 in (.97 meters) deep. However, Broadnose Sevengill shark also occurs in lower depths of water on continental shelves, with the large ones being found offshore at depths as low as 1,870 ft (570 meters).

Their preferred habitat include; sandy or muddy areas and rocky bottom substrates.

The Broadnose Sevengill Shark are skilled and opportunistic predators that are capable of feeding on variety of preys including; dolphins, rays, other sharks, bony fish, seals, and dead matter. Their sharp and jagged upper teeth are ideal for grasping moving prey, while their large, comb-shaped teeth on the lower jaw are used for tearing and cutting.

The Broadnose Sevengill sharks sometimes hunt in packs. As their diet includes the large animals like other sharks including the marine mammals, so teamwork to capture prey is definitely a great strategy.

Search the Web for More information on Broadnose Sevengill Shark at LookSeek.com Search