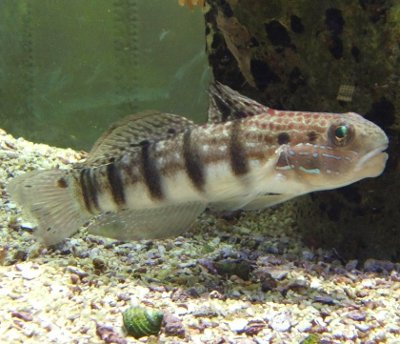 Features about the banded Goby fish

The Banded Goby fish widely varies in its body colorizations depending on the fish species. For example, the Sleeper Green Banded Goby fish has a predominantly soft body with a delicate overtone of olive and a greenish yellow head. The neutral colorization provides an excellent canvas for the iridescent turquoise-greenish blue to orange facial bands which sparkle with vibrant energy. Sandwiching the band is a thin stroke of the complementary orange color which gently extends across the whole body. The Hi Fin Red Banded Goby fish has a silver-white colorization with distinctive diagonal dark stripes across the body and a yellow face. The fish is known to be great for reef aquarium or a passive fish only.

Aquarium of the Banded Goby fish

To be successfully kept and cared for, the Banded Goby fish requires to be housed in a well-established thirty gallon (113 liters) filled with live sand as the substrate. In addition, the Banded Goby fish also requires a well-sealed canopy to prevent the fish from leaping out of the tank aquarium. The Banded Goby fish is rarely aggressive towards other fish species although it tends to demonstrate territorial behaviors unless it is kept in a mated pair.

Test the water when preparing your tank for your fish: You will need to purchase a liquid tester so that you can test for Nitrates and Ammonia. The strip-style test kits are unreliable and a waste of money. You should use a dechlorinating product to remove the harmful chlorine from the water. Test for nitrite, ammonia, and proper PH. The ammonia should always be 0, the nitrite should be 0, and the nitrate should preferably be below 20 ppm. If it's at or above 40 parts per million (ppm), you have too many fish or are not changing the water often enough. Cycling your tank is important, Follow the steps to cycle your tank. This establishes healthy bacterial and chemical levels.

Diet of the Banded Goby fish

The Banded Goby fish is a carnivore which can feed on prepared foods for carnivores, live black worms and a variety of live and frozen shrimps including the brine shrimp and the mysis shrimp.

Search the Web for More information on Banded Goby Fish at LookSeek.com Search