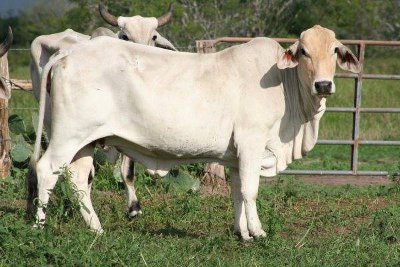 Brahman Cow varies in color of their coat; even so their genetic purity remains the same. An average bull can weigh up to an average 2,200 pounds (998 kg) while the cow weighs to about 1,400 pounds (635 kg). The calf is generally small to moderate when born. The Brahman Cow are large bodied, with a hump at their back just above the fore-limbs where the neck ends. The Brahman Cow are remarkably muscular and were a work force in some part of the continent in the early ages. The Brahman Cow have a small head with a broad forehead. The ears are large and drop downwards, and also have a black muzzle. They have large horns that curve upwards, and are highly recognized with the excess skin on the neck throat and underbelly.

The Brahman Cow is a hardy breed that can survive even in the extreme climatic conditions. The Brahman Cow have a dark skin that aides in filtering the sun and acts as a barrier for the harmful sunlight. They secrete an oily substance that is thought to act as insect deterrent. At winter the Brahman Cow coat grows thicker, and with the heavy musculature they can easily shake off insects. One of the special feature that the Brahman Cows have over their counterparts is the ability to sweat freely, this contributes to their heat tolerance.

The Brahman cow has excellent maternal qualities, they have higher fertility, increased milk production, and they also wean fast-growing calves with quite less input. The Brahman Cow has a longer productive life, being able to raise more calves compare to any other breed.
The Brahman Cow calves are greatly noted for their fast gains, they will consistently gain more weight per day than most of the other breeds.

Efficiency is definitely the most important trait of the Brahman Cow breed, but the carcasses have high cut out, resulting to a high yielding carcass with extreme limited fat.

Brahmans are considered to be very docile, they are quite easy to handle and will respond positively if it is well handled.

Though the Brahman Cows are lankier compared to the other British and Continental breed, it allows the beef industry access to the region with would have been deemed with very little to offer. This hardy breed provides an excellent option especially in the deserted regions or areas with inconsistent grazing.

The male cows name is called a bull and the young they produce are called calfs. When do Brahman Cows give milk for the first time, after they have given birth to a calf for the first time. Brahman Cows can hear frequencies higher and lower much better than humans. Beta carotene found in grass that Brahman Cows graze on, is where butter gets is natural yellow color. To make one pound of butter it takes 21.2 pounds (9.6 kg) of whole milk. Brahman Cows have 32 teeth and chew 50 times per minute. Brahman Cows live about 5 years, the way you tell the age of a cow that has horns, is by counting the number of rings on the horns. Brahman Cows have panoramic vision they can see in every direction. 101.5°F (38.6°C) is the average Brahman Cows body temperature.The oldest cow was named Big Bertha, which died just 3 months short of her 49th birthday. Brahman Cows can sleep while standing. A Brahman Cow can not climb down stairs but it can climb up stairs. It can not climb down because cows knees do not bend the right way for going down stairs. Brahman Cows spends about 5 1/2 to 7 hours every day eating cud (food that has been partly digested and returns from the first stomach of ruminants to the mouth for more chewing) and about 8 hours on chewing it, they have one stomach, but for digestion Brahman Cows have four digestive compartments called reticulum, rumen, abomasum and omasum. The Brahman Cow on average in the United States can produce about 21,000 lbs (9525 kg) of milk in one year, that’s about 2,500 gallons (9463 liter) a year, and for the time of its life on earth, a Brahman Cow can produce about 200,000 glasses of milk. A 1000 pound cow in a year can make about 10 tons of manure. Brahman Cows chew about 50 times per minute. A Cows is considered sacred in the religion Hindu of India. Brahman Cows can drink a about a bathtub full of water a day, which is equivalent to 40 gallons (151.4 Liters)of water a day. The average cow in the U.S. Can produces 53 pounds (24 kg) of milk per day, or 6.2 gallons (23.4 Liter). A Brahman Cow gives milk for the first time after giving birth to a calf. It takes about 12 pounds (5.4 kg) of whole milk to make one gallon of ice cream. Brahman Cows can smell something up to 6 miles (9.65 Kilometer) away, they have superior sense of smell.

Search the Web for More information on Brahman Cow at LookSeek.com Search