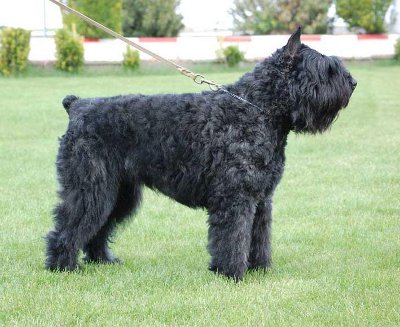 His flat and long head governs his body profile, which is actually proportionate with rest of the body making Bouvier to have a square-shaped body. The broad and short back is characterized by a strong, level top-line. The slightly tapered, strong and broad muzzle runs parallel to the skull, which is normally broad in between the ears. The Bouvier des Flandres Dog has bushy eyebrows, dark brown eyes having black eye rims and a black nose. The average height of the male to the shoulder is 23 to 28 inches (58.4 to 71 cm) Females 22 to 27 inches (55.9 to 68.9 cm).
The average weight of the male 75 to 112 pounds (34 to 50.8 kg) and the average weight of the female 60 to 80 pounds (27.2 to 36.2 kg).
Bouvier des Flandres Dogs sweat glands are between their paw pads.
A Bouvier des Flandres Dog sees in color and have better low light vision. Bouvier des Flandres Dogs have three eyelids, a lower lid, an upper eyelid lid and a third lid, that is called a haw or nictitating membrane, this keeps the dogs eye protected and moist. Dogs eyes have a special membrane for seeing better at night, called a tapetum lucidum - a dogs reflective layer in the choroid chiefly of nocturnal, causing the eyes to glow when light at night hits the eyes and they consist of some layers of smooth flat cells covered by a section of double deformed crystals
The Bouvier has triangle shaped and the tail ears that are set high. The ears are either natural or cropped. While the front legs are straight, his hind legs are well-muscled and powerful. The teeth coincide a level (scissors bite).

Dogs have two times the amount of ear muscles than people. A Bouvier des Flandres Dogs can hear a sound at four times the distance of a human. Sound frequency is measured in Hertz (Hz) Def-Hertz is the measurement of frequency, explicitly it's one cycle per second. The higher the Hertz are, the higher the pitched the sound is. Dogs hear best at 45,000 Hz to 65,000 Hz, while humans hear best at around 20 Hz to 20,000 Hz.

The Bouvier des Flandres Dog has a weather resistant double coat covered by rough and harsh hairs. Nonetheless, the undercoat is soft and fine but it is dense. When the coat is trimmed, the dog remains with the shaggy, beard and eyebrows. The Bouvier des Flandres Dogs are covered with blonde, fawn, black, salt and pepper, brindle or gray colors. Some breeds have a tiny white star at the chest.

The number one heath problems amongst Bouvier des Flandres Dogs is obesity, so always make sure your dog doesn't get to fat. Many foot problems that Bouvier des Flandres Dogs have are just an issue of long toenails. They can be prone to cataracts, Cushing's Disease, Addison's Disease, Gastric Torsion, Subvalvular Aortic Stenosis Epilepsy, Hypothyroidism, Ectropion, Entropion, Hip Dysplasia, Elbow Dysplasia and Glaucoma. They have high pain threshold giving the veterinarians a hard time to recognize where they are hurt. He doesn’t do well indoors but he needs a lot of grooming. The Bouvier des Flandres Dog can live up to 12 years if he is cared for as recommended.

If purchasing a Bouvier des Flandres Dog from a breeder, make sure to find a good breeder with references check at least two to three of the puppies that were purchased from this breeder.
The Bouvier des Flandres belongs to the Herding Group and in 1931 was recognized (AKC) American Kennel Club.

A Bouvier des Flandres Dog’s mouth can apply approximately 150 to 200 pounds of pressure per square inch and an American Pit Bull Terrier, German Shepherd Dog and a rottweiler can have 320 LBS of pressure on avg.

Average body temperature for a dog is between 101 to 102.5 degrees
A Bouvier des Flandres Dog is an omnivore, (definition-they eat both other animals and plants). All Dogs are direct descendants of wolves.