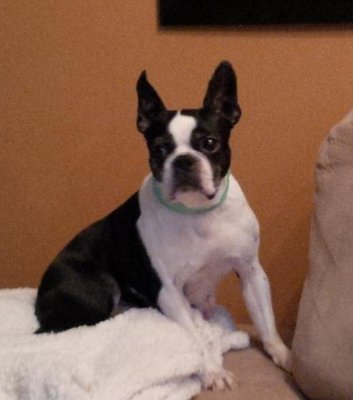 An average Boston Terrier Dog, has shoulders width ranging within the range of 15 to 17 inches (38.1 to 43.18cm) on the shoulders and a weight of about 17 to 25 pounds (43.18 to 63.5cm). It features are a square head, ears that are medium sized, short tail that doesn’t call for any docking and a short, neat coat colored in seal, black and brindle with white markings.

As its name goes, the Boston Terrier Dog originated from Boston in the United States. Initially, it is said to have been a big dog, with an estimated 45 pounds (20.41kg) of weight. During these times, it was majorly bred for fighting purposes. Later, the Boston Terrier Dog breed was developed into a better species, one with improved disposition and a much more sensitive dog.

A Boston Terrier Dog’s mouth can apply approximately 150 to 200 pounds of pressure per square inch and an American Pit Bull Terrier, German Shepherd Dog and a rottweiler can have 320 LBS of pressure on avg.

Due to its short structured face, you should always pay attention to the Boston Terrier Dogs breathing systems. You should bear in mind the probability of heat stress due to the breathing problems. A stub-nosed dog, like Boston Terrier Dogs has trouble cooling the air going into their lungs as efficiently as a longer-nosed dog, and that's what makes them much more susceptible to heat stress. The Boston Terrier Dog might also suffer from a condition commonly referred to as snort attack. This is a kind of problem that develops from prolonged snoring. The short coat, helps them being able to stand extremely cold weather. Boston Terrier Dogs have trouble with passing gas a lot, this is just who they are, this has a lot to do with their diet, so changing the dogs food may be necessary more than one time to get it right.

Search the Web for More information on Boston Terrier Dog at LookSeek.com Search