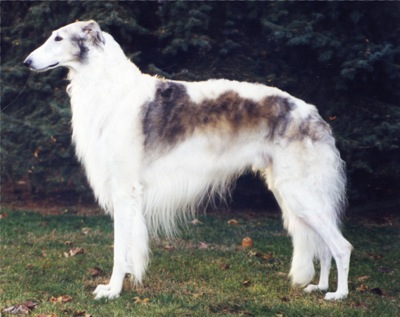 Facts about Borzoi Dogs (Russian Dog), "Scientific name for Borzoi Dog, or domestic canine, is Canis lupus familiaris". Nurtured and developed in Russia for trailing and hunting, the Borzoi dog is well known for its great teamwork with its disposition similar to those of the Greyhound. They were famously known as Russian Wolfhounds. This dog looks brings a picture of refinement and elegance because of his narrow head, tall, lean body and silky coat. The Borzoi Dogs are attention seekers and often, you’ll see them lounging at palaces or backing loudly across the Russian countryside as they run down wolfs. The Borzoi Dog elegance is just juxtaposed with their laid back character.

Borzoi Dogs sweat glands are between their paw pads.
A Borzoi Dog sees in color and have better low light vision. Borzoi Dogs have three eyelids, a lower lid, an upper eyelid lid and a third lid, that is called a haw or nictitating membrane, this keeps the Borzoi Dogs eye protected and moist. Borzoi Dogs eyes have a special membrane for seeing better at night, called a tapetum lucidum - a dogs reflective layer in the choroid chiefly of nocturnal, causing the eyes to glow when light at night hits the eyes and they consist of some layers of smooth flat cells covered by a section of double deformed crystals

Borzoi Dogs have two times the amount of ear muscles than people. A Borzoi Dogs can hear a sound at four times the distance of a human. Sound frequency is measured in Hertz (Hz) Def-Hertz is the measurement of frequency, explicitly it's one cycle per second. The higher the Hertz are, the higher the pitched the sound is. Dogs hear best at 45,000 Hz to 65,000 Hz, while humans hear best at around 20 Hz to 20,000 Hz.

With slanted eyes and black nose, these graceful Borzoi Dog has teeth that meet in a level. Borzoi Dogs deep and narrow chest is supported by a slightly arched back-line. The front legs are straight; the ears are small and lay back on the head, while the tail is set low with a smooth curve.

The Borzoi dog has a silky, soft, long and wavy often flat coat coming with combination of colors including white, black, tan, golden in either solid or mixed colors and tan or gray with black markings. The Borzoi Dogs hair on the rear parts of the body and the neck is usually longer than those found in the rest of the body.

The number one heath problems amongst Borzoi Dogs is obesity, so always make sure your dog doesn't get to fat. Many foot problems that Borzoi Dogs have are just an issue of long toenails. The Borzoi Dogs are generally tough breeds but they may contract gastric torsion. The cardiomyopathy and the cardiac arrhythmia isn’t common with this breed. The Borzoi Dog aren’t affected by any kind of dysplasia which is a common.

A Borzoi Dog’s mouth can apply approximately 150 to 200 pounds of pressure per square inch and an American Pit Bull Terrier, German Shepherd Dog and a rottweiler can have 320 LBS of pressure on avg.

All dogs are identical in makeup big or small– 42 permanent teeth and 321 bones. Borzoi Puppies have 28 teeth and when they become adult Borzoi Dogs they have 42 teeth.
Female Borzoi Dogs are in heat for matting for about 20 days twice a year. Borzoi Puppies for their first few weeks will sleep ninety percent of the day and their vision is not fully developed until after the first month. Female Borzoi Dogs are pregnant for 60 days before they’re puppies are born

When purchasing a Borzoi Dog from a breeder, make sure to find a good breeder with references, check at least two to three of the puppies that were purchased from this breeder.
In 1891 the Borzoi Dog was recognized (AKC) American Kennel Club recognized.
The average life span is 10 to 12 years.

Average body temperature for a Borzoi Dog is between 101 to 102.5 degrees
A Borzoi Dog is an omnivore, (definition-they eat both other animals and plants). All Dogs are direct descendants of wolves.