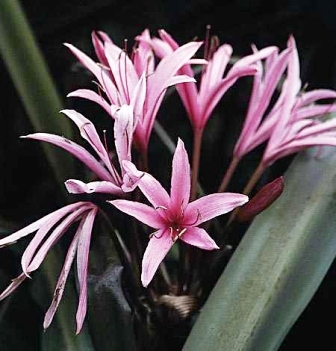 The bog lily is an aptly named bright lily that grows in bogs, swampy soil, the soil by streams and low lying water.
The bog lily, also called the string lily, swamp lily and southern swamp lily, grows up to two feet tall. This water loving plant actually grows in blogs. It can grow in moist soil or water up to six inches deep. It is popular in flooded areas and water gardens. The water lily may be potted or put in the rocks of a stream bed.
The pink to red varieties are formally called Crinum Henehune. Crinum Americanum is a white to blue bog lily species. Both varieties bloom periodically throughout the year unless it is freezing. All bog lilies bloom during the summer. They have long narrow, woody leaves. They have large bulbs that produce thick flower stalks.
The bog lily has beautiful six petal flowers ranging from white to fluorescent pink to red. Pink and red bog lilies have dark red stamens. Depending on the variety, the blooms can be as large as six inches across. The blooms are very fragrant, and the flowers emerge on a long stalk separate from the leaves.
Bog lilies grow in hardiness zones seven through eleven naturally, but can grow in warmer zones. They should be set so that the top of the pot and roots is level to the water or just above it. The bog lily does not tolerate full submersion. Re-pot the plant if it overgrows the pot, but all dead growth must be removed before it is returned to the water. Bog lilies can be left in the water garden through winter if you live in zone 6 or a warmer zone.
Varieties of bog lilies tolerate partial shade to full sunlight. They prefer PH levels from 6.5 to 7.5.
The bog lily can be propagated via seed or bulb offsets. It is a perennial plant as long as it doesn’t die back due to freezing.

Search the Web for More information on Bog Lily at LookSeek.com Search