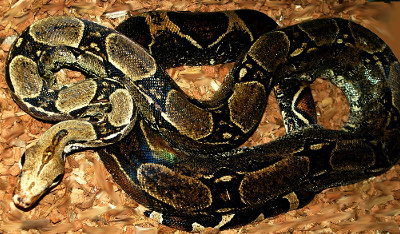 Facts about Boa Constrictor snakes. The term: constrictor implies that they kill their prey by squeezing the pray to death before swallowing them whole. After squeezing their pray, they stop squeezing as soon as the heart stops. The boa constrictor is one the most well known boas found in the over grown jungles of South and Central America, most of Latin America.
The boa constrictor has cryptic coloration throughout its entire body. Boa constrictors are usually gray or dark and off yellowish with uneven spots and dark brown patterned lined with a reddish light-yellowish colored tail. The cryptic coloration throughout its entire body depicts debris on the forest floor for blending in, by using it's patterns of black, brown, cream and reddish brown markings. The coloration on the dorsal side (top of body) of the boa constrictor is much darker than the coloration on the ventral side (bottom), which is mostly cream colored with dark speckles. Adult boa constrictors can measure up to 11 ft in length. Some Boa Constrictor snake are not large pretty small in size compared to the bigger boas. they measure up to only 20 to 30 inches (50 cm to 70 cm) long fully grown. Boas will coil their body to suffocate their prey to death before swallowing them. The size of the food (pray) that the Boa will eat, will depend on how long a boas digestive system will process it, it may take several weeks or longer to digest its food.
Scientifically the boas belong to the Boidae family. Corallus canina, commonly called the emerald tree boa, and the Charina bottae, known as the rubber boa. Boa contractors can live in in the wild from up to the age 20 or 30 years. Many boa constrictors are hunted by people for their beautiful skin.
The average weight of boa constrictors is around 50 to 70 pounds (22.6 to 31.7 kg) full grown. However, some Boas can reach up to a 100 pounds (45.3 kg).
Boa Constrictor snakes do not have ear holes to detect sound, They us ground vibrations through their jawbone. They also will detect low-frequency airborne sounds. Boa Constrictor snake also have specialized nerves scattered throughout their body that can detect heat increase or decrease around them. It is thought that these nerves are used to detect when air temperature changes. Instead of smelling the air like most animals, Boa Constrictor snakes taste the air with the help of the Jacobson’s organ, found in the roof of the mouth. The tongue catches airborne particles, which are then transferred to the Jacobson’s organ to be deciphered about what kind of pray might be coming. A baby Boa Constrictor snake will grow inside the stomach of their boa mother. When a baby boa constrictor is born, they already know how to hunt food and protect themselves from predators.

Search the Web for More information on Boa Constrictor Snake at LookSeek.com Search