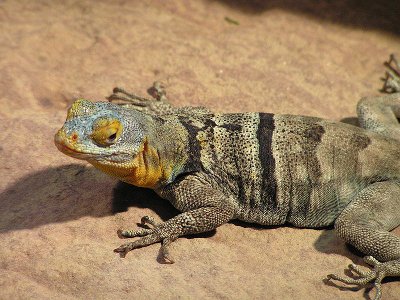 Blue spiny lizard are covered by large, keeled scales that are visible in a distance. When you look at their neck, there is a black collar making round which also is very visible. Generally the Blue Spiny Lizard is brown in color with some blue color on the shoulders. In fact there are other blue spiny lizards that have more blue colors than others.

Despite both sexes having blue shoulders, the females are a bit dull. The males have a blue green sheen which is visible on the back. The color blue extends to the chin, belly and throat. The females and young ones lack that blue-green sheen.

Blue Spiny Lizard is a diurnal which means it is very active during the day. It loves climbing rocks and trees. It can also be found on the ground though rarely. Blue spiny lizards love eating flying insects though its main diet is invertebrates. It also eats plants. It spends most of the time under rocky crevices protecting itself from harsh temperature or hiding from predators.

Though the Blue Spiny Lizard does not have many enemies it uses its sharp point scales to defend itself. So when attacked it tries to fight back its enemies by piercing. Blue Spiny Lizard can also camouflage to keep from being seen.

When mating season commences, it shows off the blue throats and bellies which attract females. Mostly it enters in dispute with other males during breeding season. The Blue Spiny Lizard bobs its head up and down trying to scare its rival. The weak lizards retreats since they can’t fight. But if the rival insists on fighting, it flattens its body and shows off the glowing blue belly as a way of protecting its territory. This may scare the rival away.

When in captive taking care is not hard just like other lizards. Ensure that the cage is spacious enough. Since they love climbing put logs on top of the cage to give them that pleasure. Live plants or plastic plants can be good too so that they can hide there. Good substrate also soft soils should also be considered so that they can be comfortable when on the ground.

For feeding purposes, ensure that you have plenty of insects, mites and green plants. Water should also be provided for your Blue Spiny Lizard. If you can give them lizard’s foods occasionally it would be helpful. Their diets should have proteins rich foods too.

Good lighting should be considered too. Keep the Blue Spiny Lizard warm by choosing bulbs that can provide heat.

Search the Web for More information on Blue Spiny Lizard at LookSeek.com Search