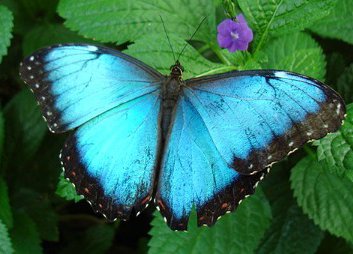 When caterpillars become fully grown they will attach to an appropriate leaf or small branch, than they will shed the outside layer of their skin and a hard skin underneath known as a "chrysalis" will be their new look
An adult butterfly will come out from the "chrysalis" than it waits a few hours for its wings to dry and fill with blood, before it takes its first flight.
The Morpho peleides has a very short lifecycle, just 115 days from egg to adulthood to death. After the Blue Morpho pupates, it loses the ability to eat and instead can only drink.
These butterflies have a broad diet. Their eggs are laid on plants in the Leguminosae family, Lonchocarpus, Medicago satvia, Bignonicaeae, ithecellbium and others. Their caterpillars are known to be cannibalistic if no other food is available. The larva are beige with green patches. The Menelaus morpho has several sub-species, and for some of these, the caterpillars may have yellow patches. The caterpillars in the Blue morpho family prefer the leaves of plants in the pea family.

A Blue Morpho Butterfly has sense organ, on their feet or tarsi, for tasting
The estimate is between 15000 and 20000 different species of butterfly.

Search the Web for More information on Blue Morpho Butterfly at LookSeek.com Search