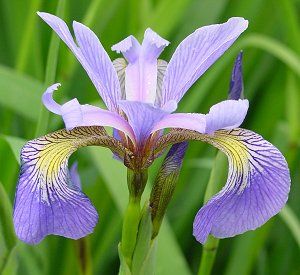 Blue flag Iris is also known as harlequin blue flag, larger blue flag or northern blue flag. Its scientific name is Iris versicolor and it belongs to iris species. It is a native of North America and most common places that you can get it are; sedge meadows, marshes, shores and along stream banks.

The name versicolor is a Greek word meaning rainbow and it is given this name because of the allusion to the prismatic colors of the species “iris” that it belongs.

Blue flag iris is a flowering herbaceous (meaning the stem and leaves dies at the end of growing season up to the soil level) which grows up to 10-80cm high. It normally forms large clumps from thick creeping rhizomes.

The stems that are formed from rhizomes have basal leaves which are around 1cm wide. These leaves are folded on the midribs to allow them form an overlapping flat fan. The flowers that develop have 6 petals and sepals. These petals and sepals have two forms that spread flat.

The long sepals are hairless and at the base they have a greenish-yellow blotch. The fruit is a 3 celled, and the larger seeds are usually seen floating in a fall. The flowers that are formed are either light or deep blue though they can also be purple or violet. But the purple and violet ones are not very common. They are only found in very few areas. These flowers bloom during May to July.

Blue flag iris has been admired by many people for centuries. This is evident due to its popularity in gardens and in Quebec’s flag there is a blue flag iris on it.

This species is very poisonous especially if consumed by human beings. But a contradicting fact is that there are others who use it for ailments like vomiting and constipation. The rhizomes formed contain a glycoside and the sap can cause dermatitis in humans, so it is not advisable to use it in food.