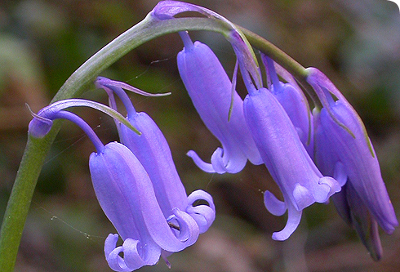 Blue Bells refer to several species with bright blue blossoms. Blue bells of these various species can be found all over the world.
English Blue Bells are native to England and France. They grow in wooded areas. They reach ten to twelve inches in height. They are planted in the fall so that they will bloom in the spring. The flowers are all on the same side of the stalk which starts to bend under their weight. Also called the common bluebell, its scientific name is Hyacinthoides non-scripta.
Spanish bluebells are similar to English blue bells except that they grow under more direct sunlight. They have stronger stalks that don’t bend under the weight of the flowers. Spanish blue bells don’t have as strong a fragrance, and they bloom in the late spring.
The Texas bluebell is Eustoma russellianum. Also called the Lisianthus, Prairie gentian and just plain bluebell, it is the state flower. The Texas bluebell is propagated by seeds, regularly spread by the highway maintenance crews so that they will erupt after the first spring rains to layer the hills in blue blossoms. The blue bells will die back after a few weeks and before the summer heat arrives.
The California blue bell, also called the desert bluebell and desert bells, has the scientific name Phacelia campanularia. They primarily grow in the Sonoran and Mojave deserts. The California bluebell is a member of the borage family.
The Royal Bluebell is an Australian flower. Its scientific name is Wahlenbergia gloriosa, and it is a member of the Wahlenbergia genus and Campanulaceae family. Like many bluebells, it grows in moist soils.
Virginia bluebells have the scientific name Mertensia virginica. These blue bells are native to the Midwest. They grow in moist soil and floodplains.
Blue bells are often used by gardeners who want blooms that appear after the early bulbs like the Easter lily and perennial flowers open.
Blue bells can be propagated by seed or bulb.