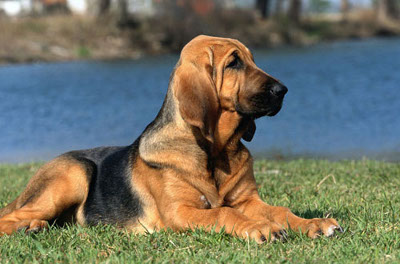 The Bloodhound Dog is a tireless trailer. Although he is obstinate and often independent, he is loyal, placid and even gentle and he can be trusted around children. He isn’t such an easy dog to train obedience, but training Bloodhound Dogs to trail is the easiest thing you can do with this dog. The Bloodhound Dog are often used by police and other people to track thieves or even prisoners who have escaped.

The average height of the Bloodhound Dog is 23 to 27 inches (58.4 to 68.5 cm) tall at the shoulders. The average weight is 80 to 110 pounds (36.3 to 49.9 kg). The Bloodhound Dog generally feature a skeletal structure with most weight concentrated in the bones. Its saddle-marked coat is tough and covered with fur without any hair. Bloodhound Dogs are marked by either black, liver, tan or red colors

The number one heath problems amongst Bloodhound Dogs is obesity, so always make sure your Bloodhound Dog doesn't get to fat. Many foot problems that Bloodhound Dogs have are just an issue of long toenails. They normally suffer gastrointestinal related ailments such as bloat alongside other ailments such as skin, ear and skin complications. The major concerns relating this dog include Epilepsy, Fold Dermatitis, entropion, ectropion and elbow dysplasia.

Bloodhound Dogs sweat glands are between their paw pads.
A Bloodhound Dog sees in color and have better low light vision. Bloodhound Dogs have three eyelids, a lower lid, an upper eyelid lid and a third lid, that is called a haw or nictitating membrane, this keeps the dogs eye protected and moist. Bloodhound Dogs eyes have a special membrane for seeing better at night, called a tapetum lucidum - a dogs reflective layer in the choroid chiefly of nocturnal, causing the eyes to glow when light at night hits the eyes and they consist of some layers of smooth flat cells covered by a section of double deformed crystals

Bloodhounds need some exercises because their bodies were made to go through any kind of hardship. One thing you should note about the Bloodhound is that, once he is on the trail, he can’t be called off. That is why; he must be exercised in a safe area.

A Bloodhound Dog’s mouth can apply approximately 150 to 200 pounds of pressure per square inch and an American Pit Bull Terrier, German Shepherd Dog and a rottweiler can have 320 LBS of pressure on avg.
Bloodhound Dog’s nose prints can be used to identify them, their nose prints are like a humans finger print. A Bloodhound Dog smells more than 1,000 times stronger than that of a human. A dog’s nose, secretes a thin layer of mucous that helps it absorb scent, after that they lick their noses and sample the scent through their mouth.

Average body temperature for a Bloodhound Dog is between 101 to 102.5 degrees
A Bloodhound Dog is an omnivore, (definition-they eat both other animals and plants). All Dogs are direct descendants of wolves.
Only humans and dogs have prostates and a dog doesn't have an appendix.

Search the Web for More information on Bloodhound at LookSeek.com Search