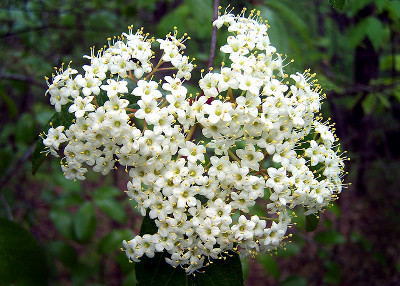 Facts about blackhaw viburnum shrub. Blackhaw viburnum is also known by other names such as blackhaw, black haw and Viburnum prunifolium the latter which is its botanical name. This species is native to the northeastern part of North America ranging all the way from Connecticut west to the eastern part of Kansas. It can also be found in Alabama and many parts of Texas.

Description of the what its used for how it grows and all about, heath benefits.

The Blackhaw viburnum is a deciduous shrub which is also classified as a small tree by some researchers. It grows to a height of between 6 feet 30 feet (2 and 9 meters) tall depending on the prevailing conditions. Its branches are stout and wide spreading while its trunk is somewhat crooked. The bark has a characteristic reddish-brown coloration while its stems have a rough and old appearance. The branchlets change color as they grow starting with red at the beginning then turning to green and finally dark brown as they mature. A rusty tomentum coats the winter buds.

The Leaves of the blackhaw viburnum shrub

The leaves of this shrub are simple in formation and measure about 9 cm in length with a breadth of about 6 cm. They are ovate and at times wedge-shaped with a rounded base. At the margins, the leaves are serrated. There is a close similarity between these leaves and those of some species of Prunus.

Flowers and Fruits of the blackhaw viburnum shrub

The Blackhaw viburnum produces creamy white flowers that measure approximately 9 mm in diameter. Compared to the axillary buds, the flower buds are slightly bigger in size. The corolla has five rounded lobes while the calyx has an urn like shape. The corolla lobes alternate with the five stamens. The stigma of the flower is flat with a single ovule. The flowering period stretches from mid to late spring. The fruits that result from these flowers are dark blue to black in color and hang on until winter. They become edible after the winter frost. The fruits of the Blackhaw viburnum usually attract birds which flock the areas where these trees are during the fruit season.

This shrub does well in an environment that is sunny with well drained soils and adequate amounts of water.

Search the Web for More information on Blackhaw Viburnum Shrub at LookSeek.com Search