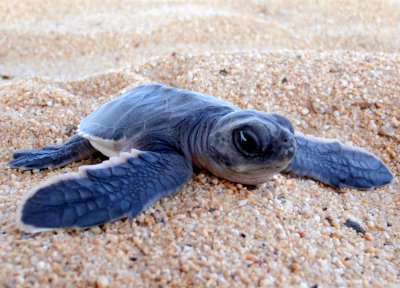 The Black Sea Turtle, which is also known as the Eastern Pacific green turtle. The green turtle and the black turtle are very similar in most respects. The black turtle can be found along the Pacific coast from Baja to Peru. The Black turtle is slightly smaller than the green turtle. It also has a narrower and steeper carapace. Their carapace has an overall gray to black coloration.
The adult Black sea turtle can weigh between 144 to 278 pounds and they can be up to 39 inches in length. Their habitat is bays, estuaries and coastal waters. Their diet consist of algae, seagrass and mangrove tree shoots.
Black sea turtles and green turtles are nearly genetically identical but they both inhabit different regions. For this reason researches feel some researchers consider the Black turtle a sub species of the Green turtle. Others feel that because of their difference in physical characteristics and behavior they are considered a separate spices.