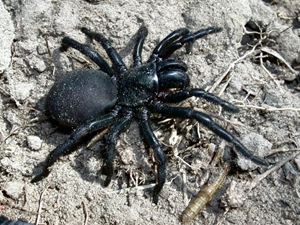 Australia has the largest number of black wishbone spiders where they are found in all habitats. Most are found in South Australia with Queensland boasting of the highest number.

Black Wishbone Spiders have thin and very long legs with either one or two fangs on the tibia, a small joint, of the first leg. The spines serve to safely lock the female’s fangs during mating.

Males are about 1 inch (25 mm) long while females are 1 3/8 inches (35 mm) long. Males wander at night searching for females to mate with especially after spring and autumn rains.

Black wishbone spiders have long fangs that can cause a deep wound on human flesh. The venom from the Black Wishbone Spiders is not as toxic as that from the closely related Funnelwebs. This venom is usually of minor medical concern.

The Black Wishbone Spiders build burrows with open entrances and that are 13 3/4 to 15 3/4 inches (35 to 40 cm) deep. These burrows are more common on flat grounds. The entrances to the burrows are usually Y shaped where one side of the entrance acts as escape routes when a potential predator attacks while the other side is covered with an odorless silk. It is at the silk covered entrance that the Black Wishbone Spiders ambush prey.

Spiders have oversize brains.
In the spider the oxygen is bound to "hemocyanin" a copper-based protein that turns their blood blue, a molecule that contains copper rather than iron. Iron-based hemoglobin in red blood cells turns the blood red

Search the Web for More information on Black Wishbone Spider at LookSeek.com Search