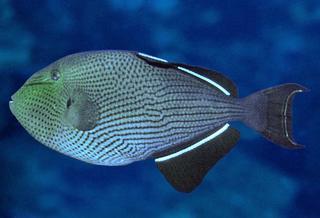 Features of the Black Triggerfish

Black Triggerfish has a blimp shape. Most individuals are a foot long, though some grow to be a foot and a half. They are mature at ten inches of length. The species prefers shallow waters and exposed reefs at depths of fifteen to a hundred and fifteen feet. They need a fish tank of at least 125 gallons (470 liters) .

Diet of the Black Triggerfish

The Black Triggerfish are omnivorous, (definition-they eat both other animals and plants). They eat algae and plankton. You can feed them vitamin enriched herbivore fish food. They eat shrimp, zooplankton, small fish and small squid. You can feed them meeting foods like krill, chopped worms, brine shrimp and diced claims. They need shelled shrimp to wear down their teeth, which constantly grow. Their teeth become visible if not worn down. Do not put them in a reef tank. The Black Triggerfish will eat sea urchins and shelled invertebrates. In the wild, they have been observed feeding on the feces and vomit of dolphins. Conversely, the fact that they eat almost anything makes them very easy to care for.

When buying your Black Triggerfish see which one looks like the healthier fish in the tank. Be wary of tanks with dead fish in them, as this can be a sign of illness or improper care. Clamped fins are a sign of illness. In addition, healthy Black Triggerfish will have no white spots, make sure they swim with their fins held upright, and have a nice rich color or colors. Make sure they swim all over the tank and look healthy.
When adding the Hawaiian Black Triggerfish to the aquarium, it is important to introduce the fish to the tank environment slowly. As soon as you get home, float the entire, closed pet store bag (with the Hawaiian Black Triggerfish inside!) in the tank on top of the water for about a half hour. This will allow the water in the plastic bag and the fish to equalize out to the same temperature as in your tank, so your fish does not get shocked by the different temperature. Next, add a small amount of water from your tank to the bag, and wait about 15 minutes. Do this at least one more time. Us a net to catch your fish and then while the Hawaiian Black Triggerfish is in the net, dispose of all the water down a drain or outside. Then transfer the fish carefully into the your tank. This process not only reduces stress for you fish, it also prevents the dirty pet store water from contaminating your tank with disease.

Search the Web for More information on Black Trigger Fish at LookSeek.com Search