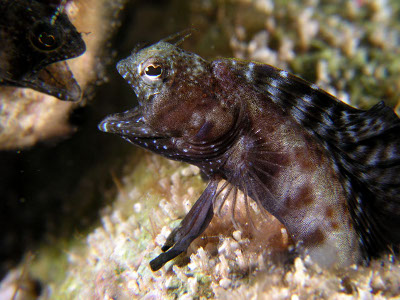 About the Black Sailfin Blenny fish

The Black Sailfin Blenny is a small, nonviolent marine fish that attains a maximum body length of 5 3/4 inches (14.5 cm) when matured. Most of the time the Black Sailfin Blenny fish have a black color body, and the male breeds are bigger than the females and experience a series of color changes in their body while breeding. They are the most obligate microalgae eaters in their family that indicates that they need microalgae in their diet to survive.

Test the water when preparing your tank for your Black Sailfin Blenny fish: You will need to purchase a liquid tester so that you can test for Nitrates and Ammonia. The strip-style test kits are unreliable and a waste of money. You should use a dechlorinating product to remove the harmful chlorine from the water. Test for nitrite, ammonia, and proper pH between 8.1 and 8.4.. The ammonia should always be 0, the nitrite should be 0, and the nitrate should preferably be below 20 ppm. If it's at or above 40 parts per million (ppm), you have too many fish or are not changing the water often enough. Cycling your tank is important, Follow the steps to cycle your tank. This establishes healthy bacterial and chemical levels.
Remove 30% of the water from your Black Sailfin Blenny fish tank each month with new water, or a 15% water change every 2 weeks is ideal for keeping nitrates lower. With corals in the fish tank, then 20% water change every month, or 10% change every 2 weeks.

Black Sailfin Blenny fish breeds are herbivores, and they feed on algae in the wild. In the aquarium, they are fed with vegetable matter, as well as dried and frozen foods, including blue-green and marine algae.

The average lifespan of the Black Sailfin Blenny breed ranges from 3 years to 5 years.